Here are the best iPad handwriting apps for those of you who’ve replaced the traditional ink and paper for a stylus and the Apple tablet. Have you ever faced a situation where you’ve been jotting down stuff in a hurry only to realize that the content you’ve noted is illegible because of all the scribbles? We know we have. Putting down words, scratching them out and adding messy annotations make for difficult reading. What if you could edit the notes at a later point of time and still have your content looking personalized in a neat manner? Take a look at the best options we’ve listed in no particular order – 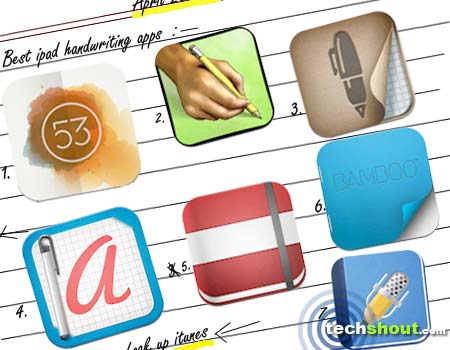 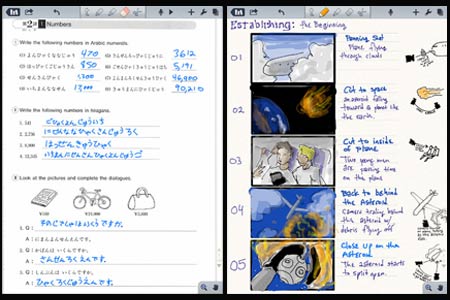 If you like to have your note taking apps littered with features, our first solution in the lineup is practically choking with them. It allows for recording audio notes, inserting pictures or clips, PDF annotation, auto-sync and extremely convenient organization abilities. 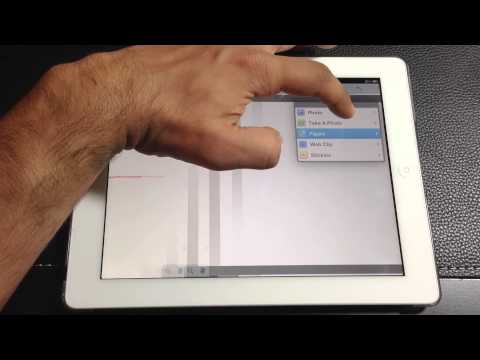 Out of all the different elements stuffed into the tool, the zoom window is probably the coolest. It works like this – you select the zoom icon and pick a portion in which you want to doodle. Whatever you write in the said window then appears in its shrunken form in the area you want the content to appear. 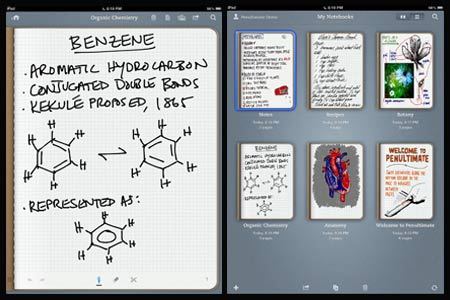 Want a quick way of jotting down stuff without too many distractions? Try Penultimate. You can start by picking from three different sorts of paper, or buy other types from the store which is accessible right from the UI. There are simple photo insertion, eraser, undo, cut and paste options laid out on the board, though you won’t get an onscreen keyboard here.

It embeds an intuitive Wrist Protect mode for detecting and ignoring the rest of your hand that’s not doing the sketching or scribbling. So no scuff marks from your wrist touching the screen while you’re using your fingers or stylus on it. 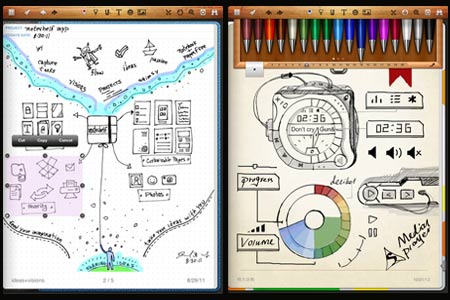 Sporting an iBook-like interface, the third contender in our iPad handwriting apps roster takes the most handy features from the two mentioned above. First off, it has a zoom window which works the same way as explained above for Notability. Secondly, it has a wrist protection mode for doing away with grazes by your palm as you take down notes. The amount of area you want to keep clean of accidental smudges can be increased or decreased starting from the bottom of the display. 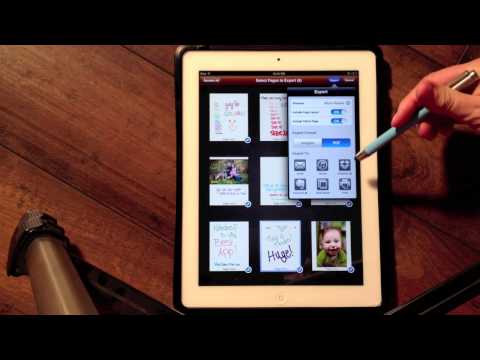 Like we’ve already stated, the books you make are placed on a virtual shelf. They can be stacked on top of each other and you can also password-protect books you’d prefer to keep away from prying eyes. Another thing we’d like to point out to is the ability to click pictures through your tablet’s camera straight from within the user interface. 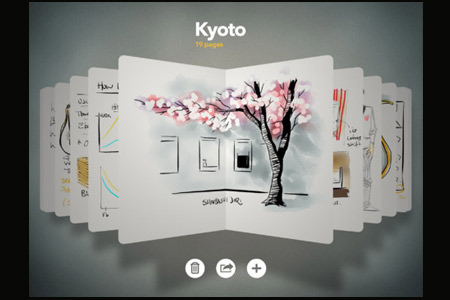 Essentially considered for drawing rather than scratching out words, Paper is a FiftyThree offering with a really smooth interface. When you open a new sheet, you’ll see that the eraser and pen are highlighted. These come for free when you download the software. This means you’ve been well equipped with the note taking basics right from the start. 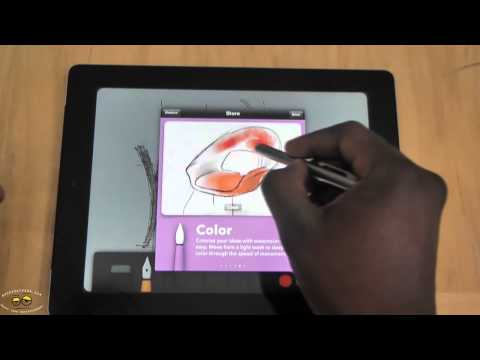 The rest will cost you $1.99 or $6.99, depending on whether you want to purchase individual add-ons or a bundle of the essentials, respectively. And if you only want to use the pen to scribble down content, it doesn’t get cheaper than $0. The utility employs a lot of gesture-based navigation controls and one of its coolest elements is Rewind, an ‘Undo’ stand-in which literally lets you ‘rewind’ back to the spot you want to start from all over again. 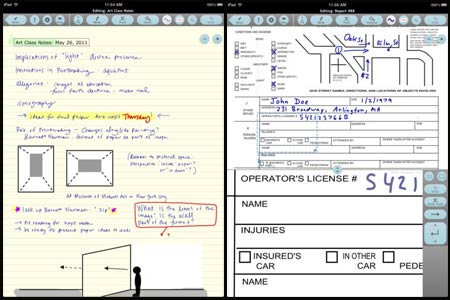 Here’s another one of those apps which has the extremely useful zoom aspect too. It lets you separate pages into documents and folders. For those who are left-handed and can’t find too many solutions suited to their needs, this one has a few variations for the same.

The zoom window we’ve talked about above can work like a typewriter sort of thing. If you enable the option, it automatically moves along with you as you write. So if the sentence you’re typing out goes beyond the selected area, there’s no need to stop and pick the region next to it all over again. Apart from that, the common features you’d expect from a tool of its ilk are also present. 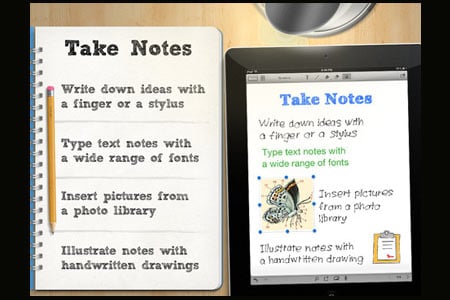 Readdle has highlighted its offering as a PDF annotating software, though it’s more than just that. But if you’d like to know what you can do particularly on the PDF angle, the developer says you may literally treat it as an actual sheet of paper and expect still more functionality. You can highlight, underline or scratch out text and even draw on PDFs. 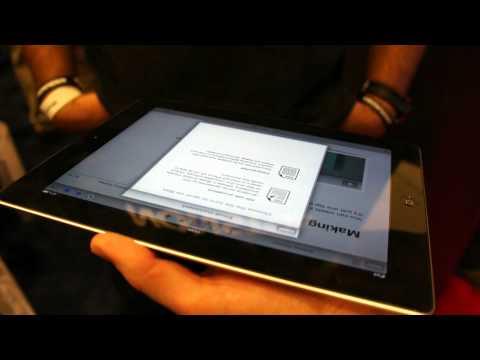 When it comes to recording stuff, you can simply tap to open a new sheet, edit notes on a Mac or PC, sketch, type in words through the keyboard and so on. Working on a project with a colleague who also has Remarks? Mail him your notes and he can edit those as if they were his own. 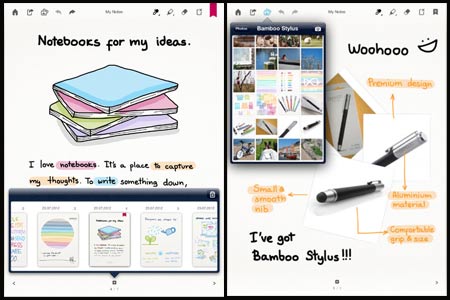 The last candidate in our iPad handwriting apps list has been created by none other than Wacom. Even if you have the suspicion that the company only has a namesake utility in iTunes in order to push sales of its Styli, the developers haven’t been lazy with its creation. The tool delivers all the staple elements you’d want for penning down things in a hurry or simply sketching at a leisurely pace. 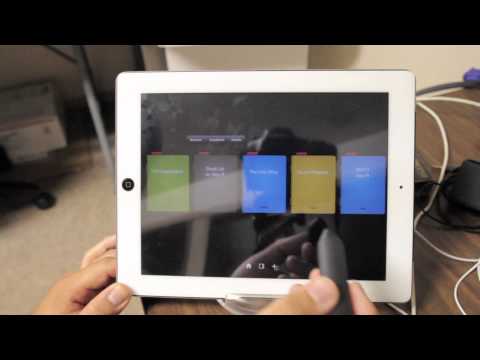 The main aspect here is that the whole digital sheet of paper can be zoomed into. It seems much more convenient and quick than a zoom window. You can back up your content to Evernote or Dropbox and also share pages via Twitter or Facebook. A highlighting option, the ability to move or copy pages from one book to another and a responsive interface are just part of the list of things you can anticipate with this one.

iTunes is choc-a-bloc with utilities for making notes on the iOS tablet. Other similar solutions to the ones we’ve picked cover GoodNotes, NoteLedge, Neu.Notes+, CaptureNotes 2 and more. Did you find our list of best iPad handwriting apps handy? Are there any other tools you prefer to use for the concerned purpose? We’re waiting for you to drop the names into the comments section below.