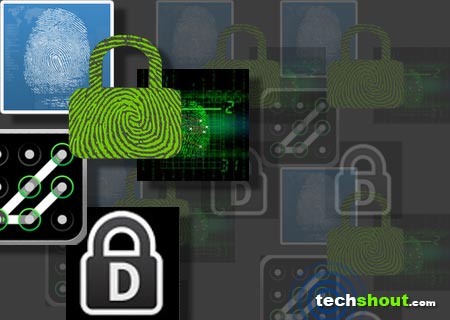 The following list of the best fingerprint lock apps for Android lets you enjoy an extremely sophisticated way of unlocking your device. So what if all of them are not authentic fingerprinting applications? They will nevertheless make your ‘spies’ believe that they cannot access your phone, and hence keep your personal data protected. These apps will prove to be of help if you wish to stop people from fidgeting with your phone or maybe just want to have some fun. Take a look at the list to find out what the Android Market stocks up on in this particular category.

First up on our lineup of fingerprint lock apps for Android is the DataDefender application. This authentic fingerprinting software is mainly meant for the Motorola Atrix smartphones as they feature built-in biometric sensors that recognize fingerprints. It is designed to safeguard your applications and other content saved on your phone from any unauthorized access by means of your fingerprint. It also comes with the option of a PIN password or pattern unlock. Once installed, it can be customized to deny access to applications which you do not want anyone else to see. This is one of the very few actual fingerprint applications available in the Android Market and works fine with all Atrix phones. It can be downloaded on other devices, but its fingerprint function will be disabled on phones other than the Atrix. 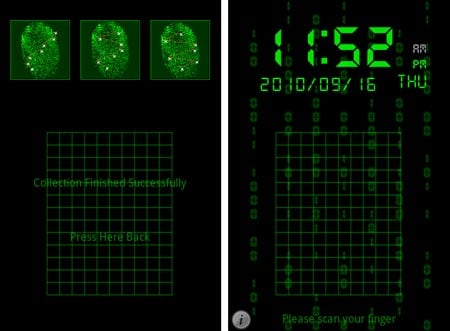 So you do not have the Motorola Atrix smartphone, but wish to have a fingerprint application in your handset anyway? Then we suggest you download the Fingerprint Screensaver for your Android smartphone. Although it won’t act as a ‘screen lock’ for your phone, it will make others believe that your mobile is capable of reading fingerprints. The application asks you to save three fingerprint samples and basically recognizes the pressure and not your impression. The screensaver will prompt you to scan your finger every time you wish to access the phone and matches the saved sample to the one that you provide when you wish to unlock the device. If nothing else, it is a good way of having fun and a welcome change from the same old PIN or pattern passwords. And considering that the app takes up less than 1MB of space, it won’t hurt to have it on the phone. 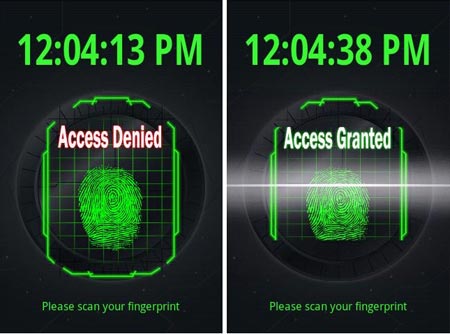 Now this is one application that will trick people into believing that your phone actually recognizes fingerprints. And unlike most other such apps, it denies access to all those whose ‘fingerprints’ do not match the one saved in the phone. So next time someone tries to access your smartphone behind your back, they will be forced to believe that you have an authentic application that scans fingerprints. To tell you the truth, there’s a trick that the app follows and no one except you will know what it is. So no one except you can unlock it – it’s as simple as that. And if you’re wondering what’s unique about the app since it is not genuine, let us tell you that it is another option for all those who are bored of their maze locks and the same old password protection. And of course, it is great to fool those friends and siblings who are constantly trying to find out your secrets.

Taking our list of fingerprint lock apps for Android a bit further is the Finger Scanner Lock. The application’s working is similar to the previously mentioned Finger Scanner Lite. Though not a proper lock, it is a fun application to have in your handset and 395KB is surely not a big price to pay. The reason why we have included it in this list is that it efficiently denies access to those who try to use your phone without your permission. Well, to let you in on the little secret, the app has a trick that needs to be followed and is meant only for entertainment purposes. But as the developer says, you need not mention that to anyone. Another good thing about the software is its sound effects range and animated graphics that make it look futuristic, like something straight out of a James Bond flick.

And the last one to have found a place on our lineup of fingerprint lock apps for Android is the Lockify – Custom Lock Screens. If you do not mind spending your hard earned money to fool people, then go ahead and download it from the Android Market. Unlike other apps listed above, this one does not use a trick, but rather various wallpapers and pictures that look like screen locks. Basically, you can create pictures using the ones offered by this application to come up with your customized fingerprint lock. And by keeping one of them as your wallpaper, the Lockify app should dupe the curious into deeming it authentic.

Until developers come up with genuine biometric applications, we suggest you pacify the hi-tech agent in you with the aforesaid applications listed on the best fingerprint lock apps for Android array. And do tell us whether your tricky endeavors were fruitful or not.