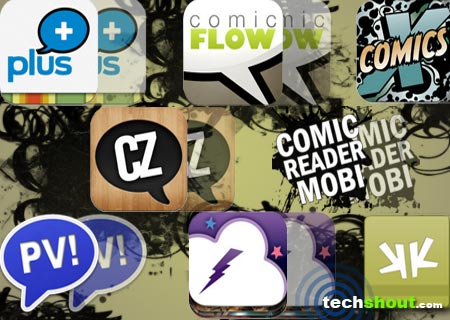 The 8 best comic book reader apps are here to satisfy your visual craving for comics. The speech balloon-, panel-filled magazines have been around for almost a century and have gathered millions of fans from all across the globe. Whenever a hot new issue would hit stores, comic book enthusiasts could be seen lined up outside the glass doors, just to get their hands on a freshly minted copy. But with the dawning of the tech era, you can now book your magazine and even acquire the same directly via the PC or portable devices. Here are some top applications that help you get your daily dose of comics. 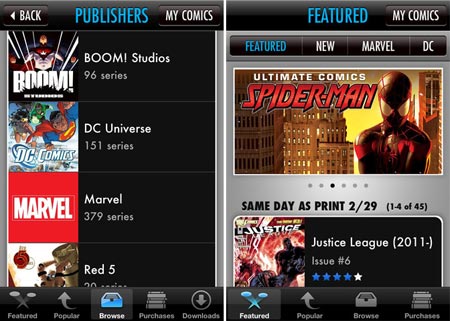 Simply dubbed Comics, it provides iOS gadget owners with pure comic bliss. Crafted for the iPhone and iPad, it boasts of hoarding a large library and enters complete with Guided View technology. There are more than 20,000 comics that are available at your disposal. Out of the array, over 500 of them can be acquired without actually shelling out even a penny. From horror treats to action panels, this application has it all. Besides supporting comics from well known publishers such as DC, Marvel, Boom, Dynamite Entertainment and Red 5, it also features titles from others like Archaia, Th3rd World Studios, A Wave Blue World, Cartoon Books, Digital Manga, First Salvo, Top Cow and Moonstone. 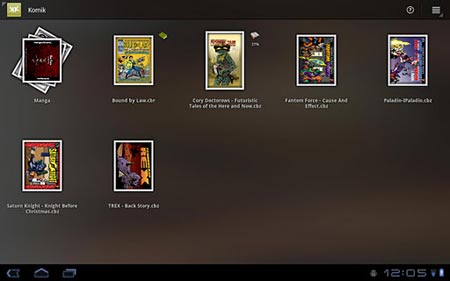 Yes, you read it right. Komik Reader is an app that’s specifically fashioned to exploit the large touchscreens employed by Android-powered tablets. It’s a comic/manga viewer as well as collection manager that comes complete with a comic collection browser. Via helpful page thumbnails, you can easily scan through your virtual stack for zeroing in on your particular desires. While reading each page, you’ll also be able to conveniently zoom in locally to get a closer look at the wordings or drawings. Furthermore, dual-spread pages are neatly laid out across the screen for a clear viewing experience. It even offers CBZ, CBR and image directory comic support as well as continuous bookmarking. 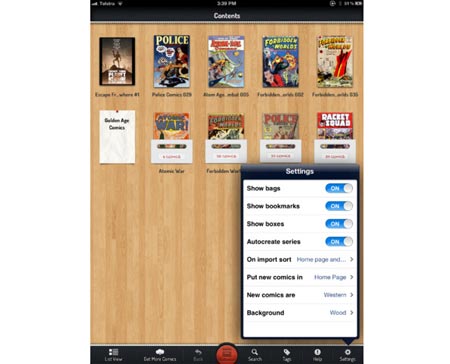 The next entrant in our comic book reader apps roster is the Comic Zeal Comic Reader application. This software option forays onto the scenario with a host of interesting features. For one, it incorporates an innovative slider which comes in handy for pushing and organizing series, comics and dividers. You can also create reading lists and reorder your collection in any format you like. 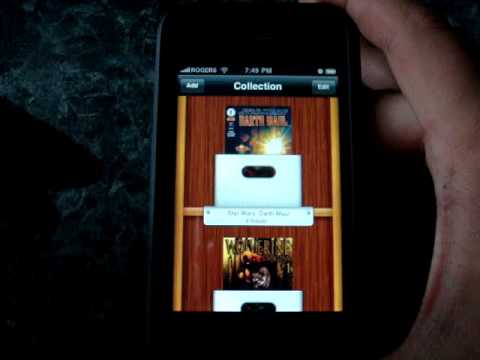 iDevice users need not manually switch to the next comic once they’re done with the previous one as the app opens the subsequent e-magazine automatically. Flip through the colorful pages by simply tapping or swiping the iPhone or iPad screen. Comic books can even be loaded via Wi-Fi, USB or apps like Dropbox. 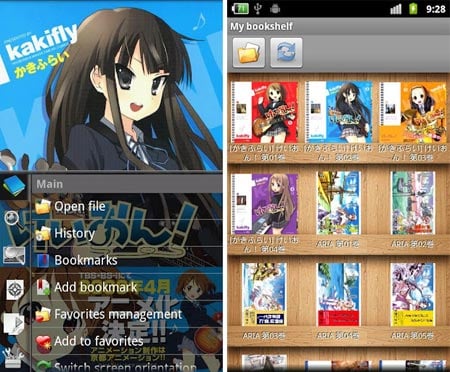 Created for Android-powered gadgets, Perfect Viewer claims to be a quick image/comic viewer, which is an ideal addition to any comic book fan’s handset or tablet. It supports various archive and image file formats such as CBR/RAR, LZH, CBZ/ZIP, 7Z/CB7, PNG, BMP, GIF and JPEG. There are five view modes infused here namely, fit screen, fit height, full size, fit width and fixed size. The app further lends support to pinch to zoom and sling gesture for an optimum viewing experience, minus any squinting. Other attributes include bookshelf and bookmark functions, My Favorites management, slideshow, cache next and previous page and auto cut off white border. 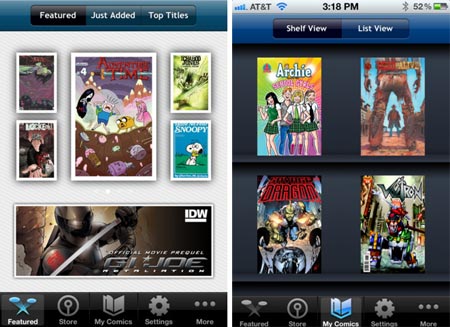 Comics Plus strides into our comic book reader apps list with an impressive lineup of more than 7,000 titles and new ones are expected every week. And similar to Comics, over 100 titles are offered absolutely free of cost. As the maker reveals, each comic is formatted to perfectly fit the iPad and iPhone screens. So, no need to spin your gadget or your head in order to enjoy the virtual material. It puts a comprehensive list of comic magazines right in your pocket. This means you can watch out for all your favorite characters and stories from various publishing houses like 1821 Comics, Ape Entertainment, Asylum Press, Blackwatch, Broadsword Comics, Immedium, Campfire Comics, Mirus Entertainment, ComixTribe and Red Eye Press. 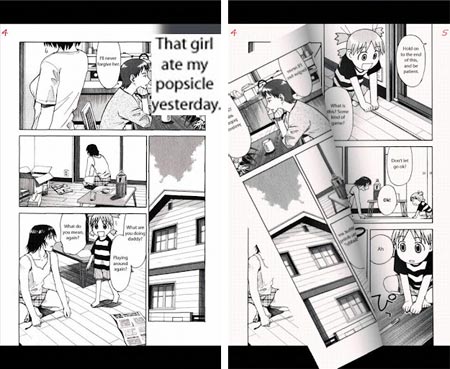 As the developer of Comic Reader Mobi discloses, ‘read full sized comics on small screens.’ And that’s exactly what you can do with this particular application. Thanks to the inclusion of the company’s Smart Lens technology, you simply have to click on a specific spot and the app will automatically ‘pop it up’ in a readable size. It supports Zip, CBZ, CRB and RAR files along with a plethora of other image types. 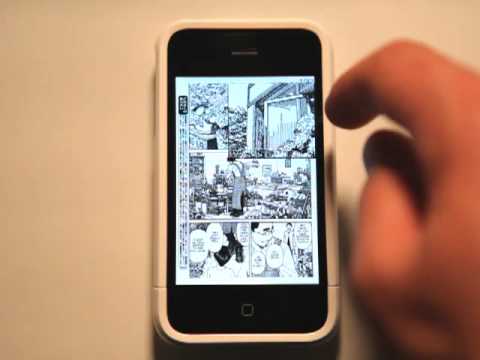 Through the Practice Language feature, you’ll be able to read comic strips in a foreign language. All you have to do is load both the known as well as unknown languages and the software will show you the text from your native language with just a click. Comic Reader Mobi is compatible with Android-powered handsets and slates. 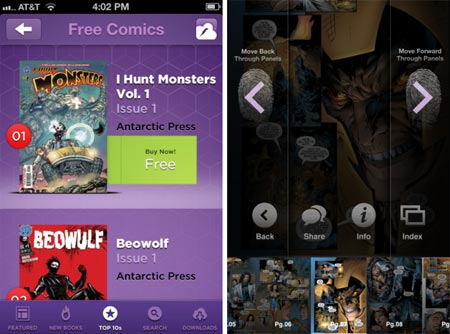 Aiming to provide a more immersive user experience, Panefly Comics enables readers to smoothly move from one panel to another. A more enhanced access and merchandising of different series titles and books are also on the cards. Available for the iPod touch, iPad and iPhone, this handy option provides bold cover art for all your searches, irrespective of whether they’re done via featured books, publisher, individual titles or top picks. 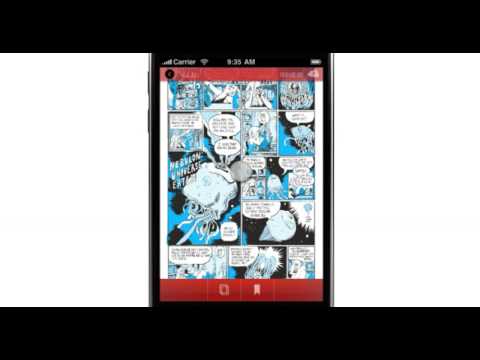 And like many of the other comic book reader apps, Panefly Comics also features an intuitive bookmarking system that helps you pick up from where you last left off. 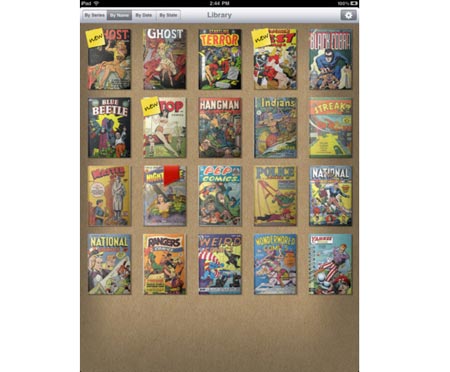 Wondering what the ComicFlow app is all about? Well, comic fans can take complete advantage of a polished interface, a comic or series thumbnail and helpful pop-up menu. As per the developer, this software can seamlessly juggle large amounts of comic collections without threatening to crash. And you don’t even have to wait for the comic files to pre-process before jumping into its engaging text and pictures. It further has the ability to import new comics in the background. ComicFlow gushes forth across the Apple iPad minus a price tag.

So whether you’re at the bus stop or lazing around in bed, you’ll always have your trusty virtual comics to keep you company. And with the aforementioned best comic book reader apps accommodated in your device, you’ll definitely have the crème of the comic crop directly at your fingertips. Do let us know which ones aided you in viewing all your X-Men, Spider-Man, Superman, Batman and Fantastic Four comics. Have a few of your own? Well, feel free to pen them down in the comment box below.