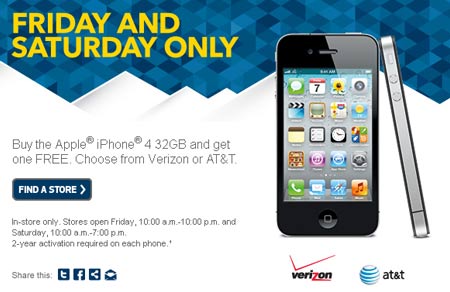 While we’re still in the cheerful holiday mood, Best Buy can take a shot at all the reckless shoppers out there, by offering a free iPhone 4 on the purchase of its 32GB version. The retailer is waving this temptation only in the faces of those on AT&T and Verizon networks or potential subscribers.

How remiss of us for forgetting to mention that the offer should only hold good until 7 p.m. today. The entire bid, picked up on by Pocketnow, is part of a two-day deal which kicked off yesterday. It does not cover the iPhone 4S, refurbished iPhone 4 handsets or early upgrades and will stay valid only while supplies last.

With instant savings and an inevitable two-year activation plan on the Verizon and the AT&T variants, the Apple iDevice can be picked up for $199.99. And its buddy will tag along for free so long as users decide to depend on one network operator for both devices. Like we needed to mention that at all. 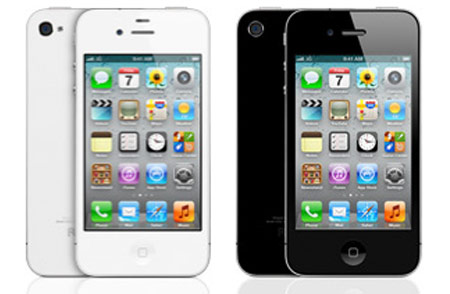 For the same $199.99 pricing, Verizon and AT&T each vend the 16GB iPhone 4S with a two-year contract and data plans. So those who simply can’t take to the idea of buying an Apple smartphone without a dual core A5 chip to speed things up, Siri and an 8MP camera, may probably want to look away from the latest Best Buy tidings.

It’d be good to note that the free iPhone 4 on the purchase of a 32GB one, is part of a deal that can only be cut at Best Buy stores.