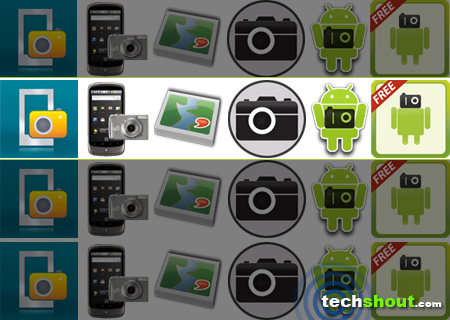 The best Android screenshot apps are indeed helpful tools for snapping up random images portrayed on your smartphone or tablet. These offerings certainly come in handy when you want to click various pictures that don’t really have a ‘save image as’ option. With these applications, anything at anytime can be ‘screenshoted’. This includes in-game screens, full message displays and even other random things that pop up within the confines of your portable device. Now to make your search a little easier, we’ve jotted down the acme answers to your queries. 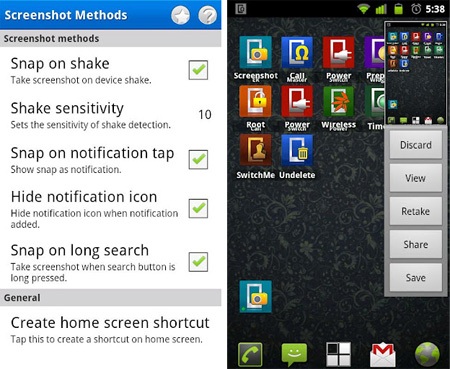 Noted to be a free screen capture app, Screenshot ER claims to ‘work where nothing else does.’ This user-friendly software is compatible with only rooted gadgets and is accompanied by loads of settings that enable you to capture any image on the fly. You can save a particular illustration through a number of easy methods. These include visible or invisible notification icons, long press on search button, device shake, delay and shortcut. You are further pampered with the ability to rotate and flip images, customize file names, manage the service via widgets and obtain an interactive thumbnail preview. Besides these attributes, it also brings forth other ‘usuals’ like countdown timers, image type, editable storage folder and built-in share menu. 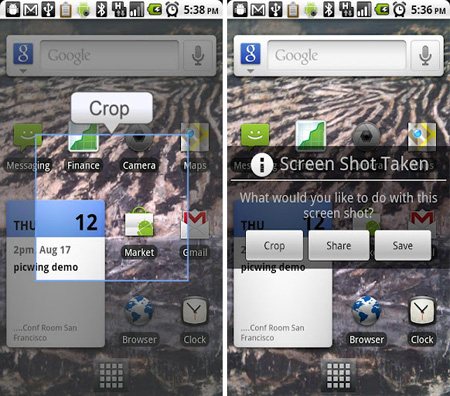 For those who wish to take snapshots but want to refrain from rooting their device, there are a couple of apps just for that in our Android screenshot apps list. One of them is the No Root Screenshot It. You would need to install a free desktop application on either your Windows or Mac computer and then run it when your handset is attached to your computer or laptop. Once this procedure is done, you are free to shoot at sight various images that pop up onscreen. They can then be cropped and saved as a png or jpg file and even be shared with friends.

You are also blessed with the ability to annotate and doodle across the photos for adding that personal touch before hitting the send button. The developer however throws an admonition to users by stating that the aforesaid steps would need to be repeated every time you restart your device. So for those who aren’t too keen on doing that can avoid this fiasco altogether by either rooting their gadget or downloading the normal Screenshot It app. 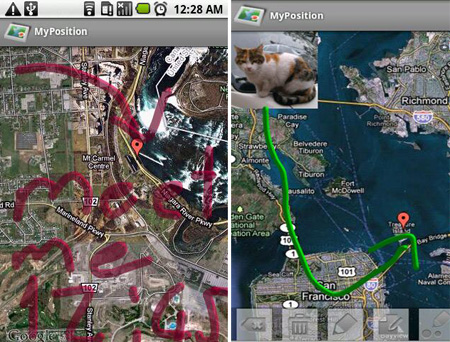 Throwing a party at a private location and want to send out exact directions to the place via your smartphone? Well, let the MyPosition app aid you in this endeavor. You can take a screenshot of the place via the application and even draw out instructions, arrows and tiny messages directly onto the snaps so that it becomes easier for your pals to find the location chalked out by you. The final masterpieces can then be sent through email, SMS or MMS for instant access. Other features read as copy to clipboard and double tap for adding or removing points. With your personalized precise navigation indicator, everyone will be able to reach your party on time without having to stop for directions or getting lost along the route. And the best part of the whole treat is that it is offered absolutely free of cost. This app eliminates the need to painstakingly draw maps yourself and then post to your friends. 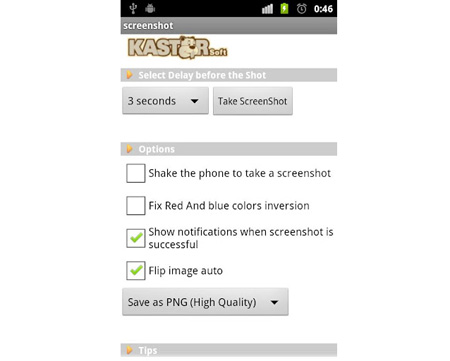 Taking a cue from its name that’s laid out as plainly as possible, the Screenshot software also enters our Android screenshot apps with equal simplicity. For taking screenshots, you can employ the timer feature which enables you to set a delay in seconds before capturing the image. After grabbing the desired data, it can be saved in the screenshots’ directory in png, jpg or bmp formats. Although the application only supports rooted phones, the makers have however stated that it is also compatible with unrooted handsets such as the LG Optimus V, M and S as well as Motorola Triumph, LG Revolution vs910, LG-P500 and GT-S5570L Galaxy Mini running Android 2.3.4. The Screenshot app can be acquired without you having to shell out even a penny. 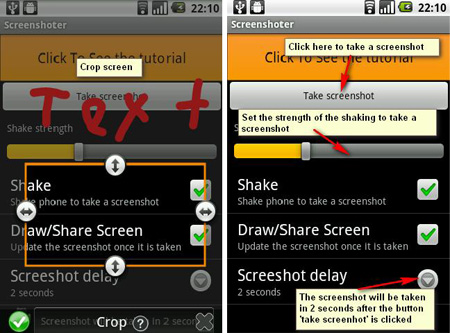 The Screenshot Free app allows you to capture the desired photo by simply giving your smartphone or tablet a quick shake. The intensity and strength of the shake can also be manually set to avoid unwanted screenshots. Post the device wobble, you can also edit it with the Pencil and Crop tools that are at your disposal. And unlike the MyPosition app which only enabled you to share pictures through SMS, MMS and email, this offering permits you to extend your imagery to others via Evernote, Facebook and Google+. There is also a dedicated widget sitting pretty on your homescreen for delayed snapshots that can be clicked with just one easy touch. An added advantage here is that for most phones, no rooting is required. And as the name suggests, this can be procured for free from Google Play. 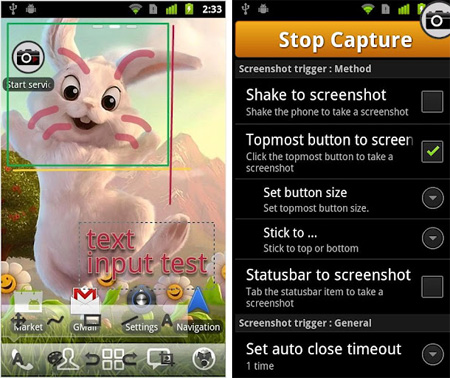 The final option in our Android screenshot apps lineup is Screenshot UX. It boasts of incorporating a host of features that enable snap happy individuals to pick out pictures with ease. Some of these attributes include an intuitive countdown feedback UI and editing tools like crop, draw, undo and redo as well as custom save folder. For obtaining a screenshot, you can shake, hit the Topmost button or take advantage of the status bar.

Similar to the previously mentioned Screenshot app, this offering is may require a rooted phone or tablet but will also work with gadgets that are not rooted. These include portable devices like the Galaxy S and S2, HTC Sensation, Motorola Atrix and LG Optimus G2X among others.

So the various options that are scattered across our best Android screenshot apps roster will surely aid you in taking screenshots of just about anything that pops up onscreen. They are all available in Google Play and with most sporting a free price tag you can give them all a try and let us know about your experiences. You can even add a few of your own if you’d like.