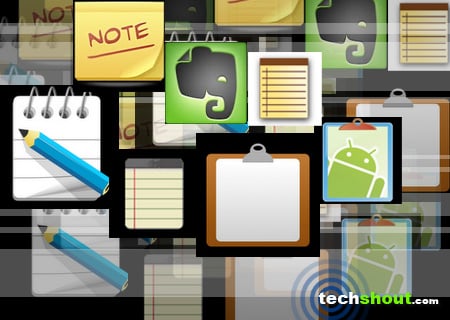 With the following best Android notepad apps downloaded on your smartphone, you will never forget to pick up a grocery item, or miss out on an important meeting. Basically, these utilities can be used to set reminders, create to-do lists or take notes on the move and they in turn make sure that you remember all that you need to do in the course of the day. So take a look at the roster and figure out the right alternative for yourself.

The ColorNote is a simple tool that lets you edit notes, shopping lists, memos, emails, messages and more. Organizing these notes should not be a problem, as you can choose different color options for them. Some other features include sticky notes widget, checklist, password protection and much more. You can also organize your schedule through the calendar and set reminders on the status bars.

And once created, the notes can easily be shared via SMS, emails or as a tweet on the microblogging website. The backup option is available too. It lets you store all your notes to the SD card for safe keeping. 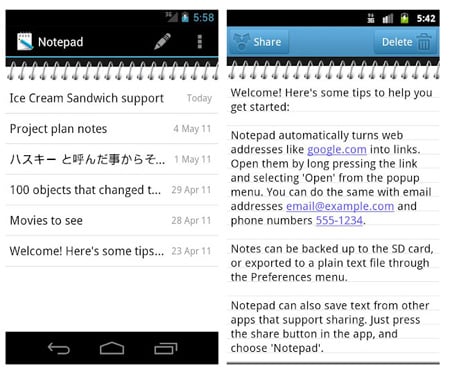 Simple and lightweight, is next choice candidate elected by us won’t take up a lot of space on your phone. What makes it worthy enough to be included in the Android notepad apps roster are its features which include automated saving, faster rendering and backups of notes that are saved on the SD card. The URLs, emails or phone numbers in the notes are converted to easily accessible links for improved flexibility. And it lets you do a lot more like launch a search, organizing alphabetically or by dates and change fonts and text size amongst others.

The developers of this software proudly advertise it as an intuitive software which can be synced to Catch.com, free of charge. Doing this facilitates taking secure backups of important information. Besides setting reminders, you can pin the notes onto your homescreen to make sure you do not end up forgetting an important task.

It lets you organize, search, or share the notes through mediums like SMS or emails. While the passcode will eliminate the risks of unauthorized access, the Twitter-like hashtags should assist you with sorting the memos. 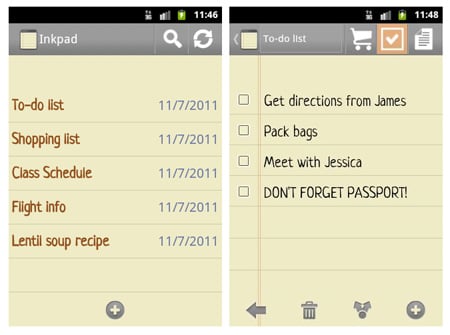 Here’s another tool on our list of Android notepad apps that promises a simple and quick way to take notes. Similar to most other alternatives on this array, even this one comes with features like reminder support, checklist, password protection, search function, widget and a number of other things. You can put in color titles and pin up sticky notes on your homescreen. Additionally, it not only allows you to export notes on the SD card but also on Dropbox, Google Docs or Evernote amongst others. Attaching pictures from the gallery or directly via the camera should not be a problem as well. 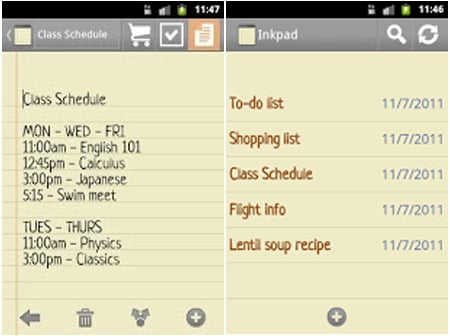 Like most other utilities of its ilk, this one lets you carry all your information as notes along with you on the phone. The key highlight of this software is the access to all the notes on the company’s provided we portal. It is designed to look like paper and can be employed for creating notes, to-do lists, shopping lists as well as saving or editing them whenever required. It highly cuts down on all the hassles as the notes are automatically saved onto the SD card as well as the online account. Although this is ad supported, they can easily be removed via the menu option on the main screen. 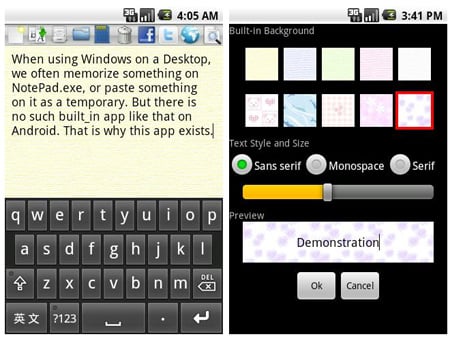 Taking our list of Android notepad apps further is one that takes a leaf out of the Microsoft Windows platform. Just like the similar software that’s native to the Microsoft OS, this tool can be launched anytime on the phone for the purpose of taking down notes instantly. You can simply close it down once you are done typing and the software will automatically save the memo. Sans any complicated features, the utility advertises itself as the simplest of them all and boasts that it is capable of carrying out the basic function of taking notes pretty efficiently. Some other features include Facebook and Twitter integration and an option to forward the notes as emails. 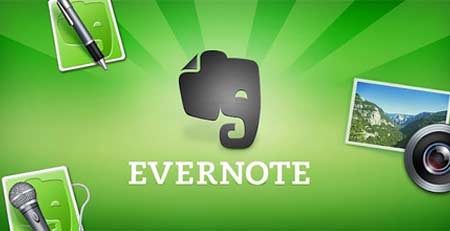 Evernote is a contender that not only allows you to take notes, but also sync them to cloud storage and access from a number of different computer or mobile platforms. Along with creating notes, to-do lists and task lists, the tool can be used to email the notes or even save tweets to the Evernote account.

Moreover, the integrated Facebook and Twitter support also assists you with sharing the contents of this software via these social networks. And if that’s not all, you can also create voice notes and search them easily on this software.

So these were the best Android notepad apps that will highly simplify your everyday tasks. Do let us know which of these you liked the most, once you are done trying.

24 Best FFXIV Mods For Every Type Of Player