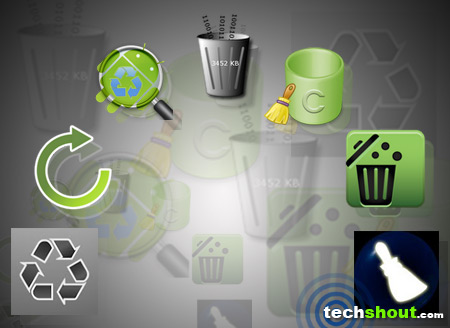 With the 7 best Android cache cleaner apps, we’re somewhat certain that low memory issues and operational lags aren’t likely to be of concern anymore. No matter how good the hardware employed within your device is, these temporary files can weigh down performance. Each time you run applications like the Android Market, web browser, Twitter, Facebook and various others, the system automatically drops some data into the built-in storage. This way, it can quickly access the content when required in the future. Well, these temporary files have a tendency to slow down your smartphone or tablet whenever the cache reaches a certain size. And that’s mainly why we’ve jotted down these recommended tools to clear off redundant data. 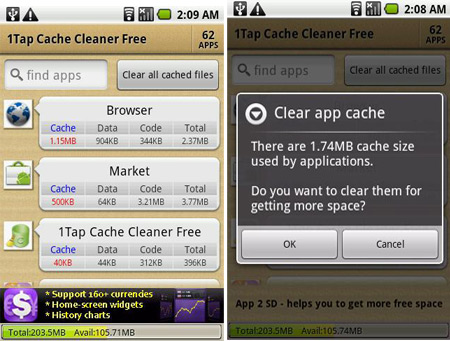 Setting the 7 Android cache cleaner apps compilation in motion, is the 1Tap Cache Cleaner tool that’s bundled with a number of features. To help you conveniently free up the internal storage, this application sports 4 cleaners such as the cache cleaner, history cleaner and call as well as text cleaner. Through its intuitive UI, wiping off unwanted data is apparently a piece of cake with a simple tap on the ‘clear all cache files’ option. The developer has also thrown in a widget for displaying the cache size and available storage. The cache cleaner feature included in this app isn’t compatible with Android 4.0.1 and 4.0.2-based devices due to a system bug. However, there shouldn’t be a problem if you’re currently running version 4.0.3 of Google’s mobile platform. 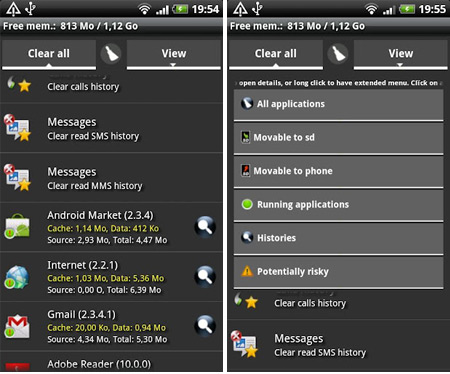 At times, just clearing out the trash from the onboard storage isn’t enough. Apps that are hoarded on the internal drive and run in the background also contribute to slow operation speeds and low memory problems. Tools like the Quick App Manager are not only equipped with cache and history cleaners, but also other options that could minimize some of these issues. With the Task Killer, unwanted running applications can be conveniently closed one at a time or by selecting multiple entries, whilst the App to SD manager should make it easier to transfer installations to an external SD card. 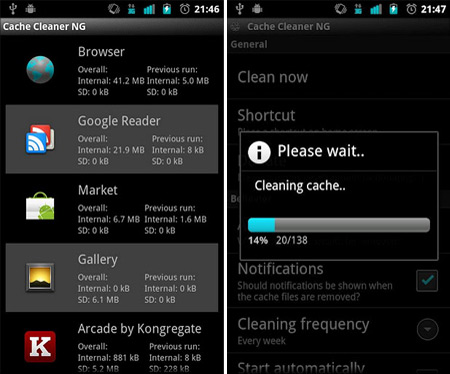 What’s the use of having applications to clear out redundant data from the internal storage when tools themselves weigh down the device’s performance? That’s mainly why we’ve hooked CacheCleaner NG onto our Android cache cleaner apps lineup. Built with a minimalistic design, this lightweight application allows you to sweep out cache files from the built-in memory and the SD card. Additionally, you can prevent any app from being closed like Google Maps, which requires the cache data for offline use and even setup a timely schedule for cleanups. If some of you experience sluggish performance during the cleaning process, the developer has left in the ‘Old cleaning method’ that can be accessed through the menu options. The CacheCleaner NG application is only functional on rooted Android devices. 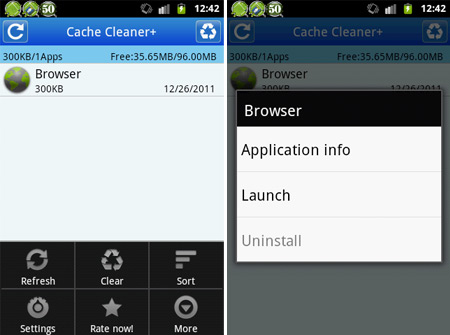 Next up is the Cache Cleaner + application which recent made its debut on the Android Market. Designed to be simple and intuitive to access, this software comes bundled with a number of features. First on the list is the ‘1 Tap to clear all caches’ that frees up the internal phone storage. You can even view the total cache size and number of applications generated. To top these off, this application is programmable to sound an alert whenever the temporary file memory reaches a certain point. Besides these, it allows you to view and launch all installations or uninstall unwanted ones as well.

Similar to the CacheCleaner NG application, the SLW Cache Cleaner Widget brings in a minimalistic and a lightweight build that sums up to 14kb in size. Not only does it save up on internal storage, but its intuitive design also allows you view the memory that is occupied by cached application files and trash unnecessary data by a simple touch of the widget icon from your homescreen. The app is said to update every 5 minutes in order to conserve battery life and extend the overall activity time. Being free of advertisements and charges, the SLW Cache Cleaner Widget is surely worth a shot. What could you possibly lose? 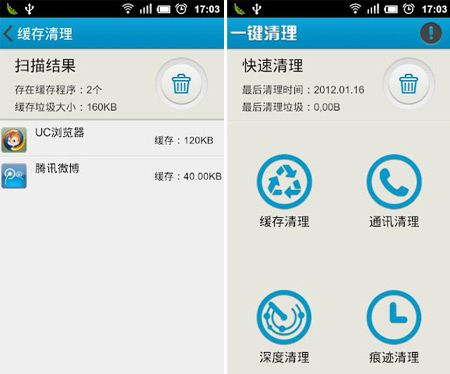 You may have one of the latest smartphones or tablets that equipped with high performance components. But no matter how good the hardware might be, slow operation speeds can still get you down. Well, our next candidate among the Android cache cleaner apps should be of some assistance. Apart from wiping off cache files, this application can also clear SMS and browsing history as well as call records and unnecessary SD card data with a simple tap. It provides you with application details and an uninstall option to get rid of tools that aren’t required. What’s more, the developer seems to have added in gesture support which is said to dump the cache whenever you shake the device. 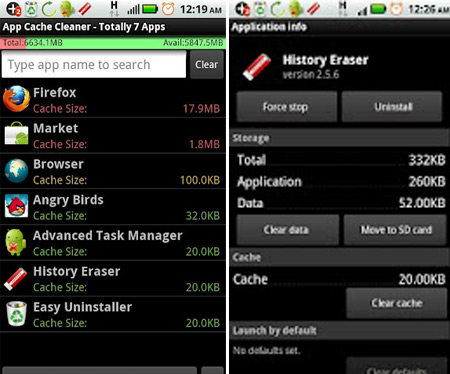 Similar to most applications we’ve mentioned today, the App Cache Cleaner houses identical attributes and a few extra features. To obtain a proper and smooth functioning device, an appropriate amount of internal ROM storage is crucial. And the only way to attain this is by clearing apps that have created cache and data files. For carrying out these operations, this application comes with an auto clear selection that can be programmed to wipe off all cached files whenever you run the tool or specify an interval. By looking at the list of all the installations arranged in an orderly manner based on size or name, accessing details and other options should be much more convenient.

We’re sure that our roster of the 7 best Android cache cleaner apps is capable of addressing at least a handful of performance issues. And if they did indeed help you out, do let us know which of these apps worked best for you.