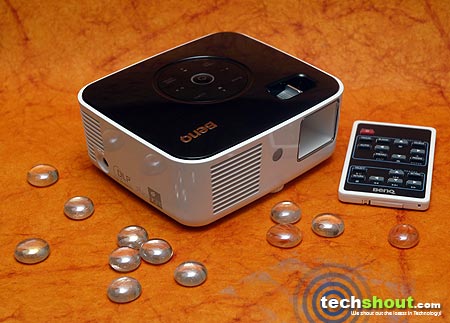 BenQ is a relatively new company in this field as they get ready to introduce the Joybee GP1 mini-projector in the market. Well, they were kind enough to send us one and our initial impressions are quite positive. Though you would call it portable, the GP1 won’t exactly fit into your pocket (unless you wear really huge pants). However, the whole package is small enough to fit into a normal backpack. It consists of AV cables, a remote, power cord and an AC adapter, besides the projector and the usual user manual and guides. 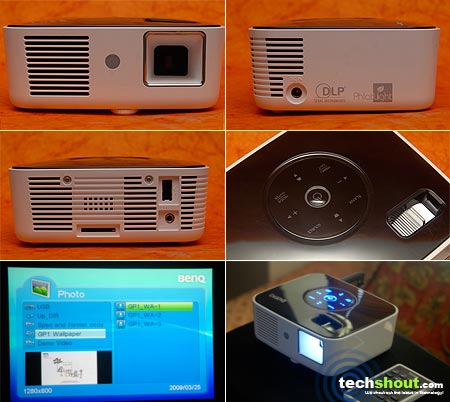 The BenQ Joybee GP1 looks impressive in the black and white combo with the glossy finish, although as is the norm these days, loves to absorb your fingerprints! But that is not exactly a problem. This small projector weighs just 640gms yet measures 136 mm x 57 mm x 120 mm. The controls are on the top while the sockets are on its sides. And surprisingly enough, BenQ chose to have touch-sensitive controls, which were a little difficult to handle. The only good thing about it was the blue backlights that seemed pretty in the dark. The remote is helpful but it also has its own issues. They could have provided a better solution.

BenQ sent us the mini projector with its own pouch. They also provided composite cables as well as VGA ones. However, when you connect it, you will notice that a proprietary A/V port and hence these aforementioned cables. Anyways, one more thing that you will find on this projector is a USB 2.0 port, which is a good thing as pen drives are the preferred carriers of data these days. So all you have to do is load up your flash drive with movies and photos and connect it to this device and you are ready to go. But the GP1 only supports major formats such as the MOV, AVI, 3GP, DivX, Xvid, 3G2 and MP3 when it comes to movies and BMP, JPEG, GIF and TIFF when it comes to images. But do take note that some of the .avi files that we played had to be enjoyed without the sound as it has some issues with audio codec compatibility. 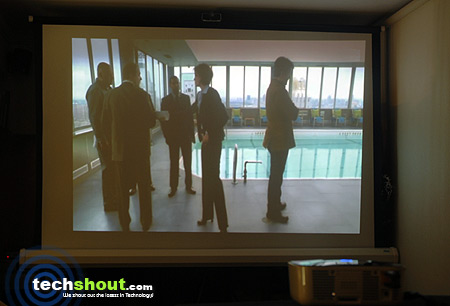 The BenQ Joybee GP1 seemed pretty imposing when we checked out the videos and pictures. Adjusting is a breeze, especially if you are someone who feels intimidated by the current generation of projectors. But one aspect that you have to consider is the sound as this mini projector comes with a 2W speaker embedded. If you think that’s not enough, the engineers at BenQ had enough common sense to include a standard 3.5mm headphone socket, which you use creatively in many, many ways.

Preferably, a projector should have a rating of at least 1000 lumens and some even have ratings of 2000 lumens. But the GP1 makes use of 100 ANSI lumens LEDs, which we can say is satisfactory at best and average at worst. 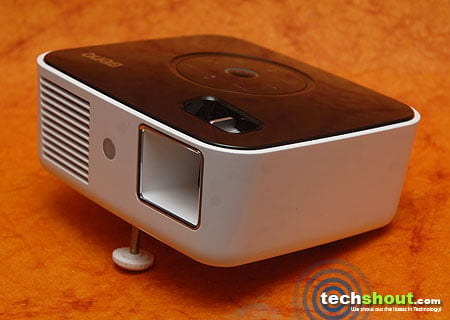 As we said earlier, the device can be hooked to a surplus of entertainment devices such as gaming consoles and media players. But the only hassle is that it would involve playing around with a lot of wires, which can sometimes turn about to be quite infuriating. Whichever ways you play the content, the native resolution is upped to 858 by 600 by the GP1 for the external sources. The medial player (onboard) plays resolutions of up to 720 x 480 quite decently. It plays videos in two aspect ratios, 4:3 or 16:9 and the best part is that it is user selectable.

The BenQ Joybee GP1 Mini Projector comes with a price tag of USD 499, which some could find expensive and rightly so. Overall, the mini projector was easy to use though the controls were a little troublesome.