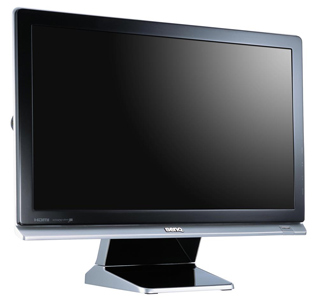 BenQ has updated its E series of monitors with the new E2200HDA. Company claims that the new display is the first desktop LCD that uses a 16:9 aspect ratio. Moreover, it fits widescreen HD content without the black bars that come with most 16:10, non-native screens.

The BenQ E2200HDA monitor features unusual size of 21.5 inches diagonally. Further it is equipped with new age features such as a full 1920×1080 resolution, capability of displaying 1080p content from Blu-ray, game consoles, or other sources. For enjoying Blu-ray and gaming consoles, the new monitor is equipped with built-in stereo speakers.

A dynamic contrast ratio of 10,000:1, automatic color adjustment, 5ms response time are some of the other key features of the new display.

Further BenQ has announced that two additional E series monitors will be shipped soon, which will incorporate DVI and HDMI for video. One of them would have a 24-inch display.

The pricing and availability of the BenQ E2200HDA monitor remains unknown as of now.