Not much has been known about the Motorola Shamu which is said to be the Nexus 6 smartphone from Google and it was only a couple of week back that we learnt of its existence. Well, that’s about to change as more information on the handset is slowly making its way to the open.

GFXBench which is responsible for revealing information on numerous unreleased devices is where the Motorola Shamu was recently spotted. But unlike the other benchmark listings, this one had no technical information to share except for performance results from one of its GPU tests.

Well, it turns out that these details are more than enough to deduce some of its hardware. The above image shows that the alleged Nexus 6 is at par with the Galaxy S5, Xperia Z2, HTC One M8 and OnePlus One in performance. All of these handsets feature the Snapdragon 801 processor which should also be inside the Shamu, given Google’s preference of having Qualcomm chipsets in Nexus phones.

TechTastic also suggests based on the benchmark data that the display which is rumored to be 5.9 inches wide, will be of 1080p resolution. If the handset was to have a 720p panel, its graphics score would be higher than the aforementioned phones. And if a QHD (2K) panel was onboard, the results would be the same as the LG G3’s. This also rules out the possibility the device featuring the Snapdragon 805 SOC.

The new information derived isn’t much, but it’s a start. And this is certainly not the last we’re going to hear of the Motorola Shamu. 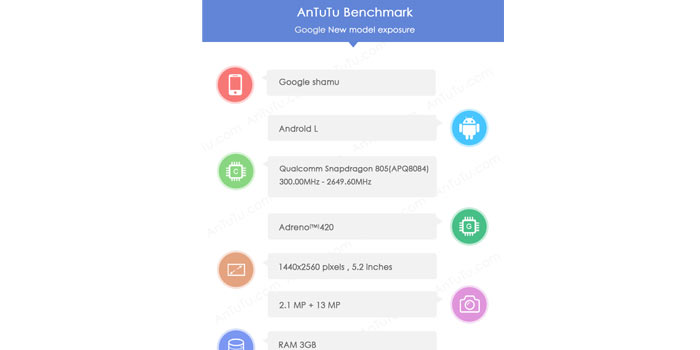 Update: AnTuTu has also posted benchmark results for the Motorola Shamu online which highlights that device will have a 5.2-inch QHD display and a Snapdragon 805 SOC. This clearly contradicts the above information.

Facebook
Twitter
Pinterest
Linkedin
ReddIt
Tumblr
Flip
Previous articleIdea FAB and Idea Ultra+ are dual SIM 3G smartphones that aren’t harsh on the wallet
Next articleAsus ZenFone smartphones will have successors, and why shouldn’t they?