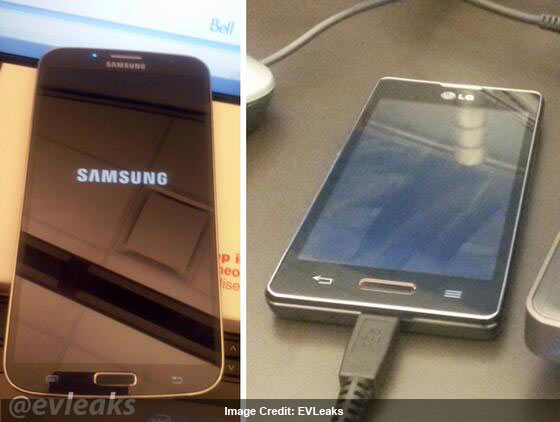 Existence of a Bell Samsung Galaxy Mega 6.3 and an LG Optimus L5 II from the same carrier has been given away by a leak which occurred yesterday. The Canadian carrier is said to be prepping up these two devices for a release soon, as brought to our notice by the notorious Twitter which calls itself EVLeaks. Pictures of both the Bell-bound Samsung and LG phones have also been revealed by the account.

And then we have the LG Optimus L5 II which we had seen coming out in May this year after having been unveiled in February. This low-range smartphone features a 4-inch IPS LCD capacitive touchscreen display which throws its visuals out with a resolution of 480 x 800 pixels at 233ppi. Sized at 117.5mm x 62.2mm x 9.2mm, it kicks in a 5MP shooter on its rear surface. Infused with the earlier version of Jelly Bean, it relies on a 1GHz processor and 512MB of RAM for its operations. Another one of its important aspects is a 1,700mAh Li-Ion battery which provides it with about 10 hours worth of talktime and approximately 550 hours of standby time on 2G.

Bell is still to announce the Galaxy Mega 6.3 and the Optimus L5 II officially, but past experiences with the source of the leaked information can affirm that both the devices should indeed exist.