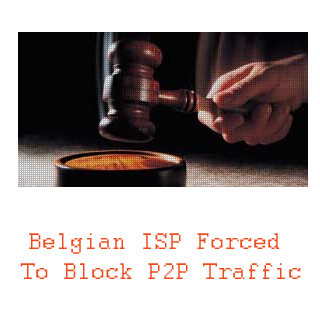 Now it has been confirmed by a Belgium court that all Internet Service Providers (ISPs) have to shoulder the responsibility for ending the flow of illegal file-sharing on their respective networks. This is the very first time that such a ruling has been passed in Europe and it further sets a significant standard in the fight against piracy internationally, thanks to the fact that it executes EU legislation. This is the first case in Europe that has performed a detailed examination of the technologies that are available to block or filter copyright-infringing traffic on file-sharing networks.

The judge of the case stated that ISPs do have the technical prowess to either block or filter copyright-infringing material on P2P networks and gave the ISP Scarlet (formerly Tiscali) six months to put into practice such measures.

The filtering technology created by Audible Magic was under special attention in the judgment passed. Further on, it also referred to six other possible solutions to block the traffic of unlicensed music, which are highlighted in an experts’ report commissioned by the court.

The Belgian court was ruling on a case brought by the body representing authors and composers in Belgium, SABAM, against the ISP Tiscali.

IFPI Chairman and CEO John Kennedy said, “This is an extremely significant ruling which bears out exactly what we have been saying for the last two years – that the internet’s gatekeepers, the ISPs, have a responsibility to help control copyright-infringing traffic on their networks. The court has confirmed that the ISPs have both a legal responsibility and the technical means to tackle piracy. This is a decision that we hope will set the mould for government policy and for courts in other countries in Europe and around the world.”

Illegal file-sharing is a big concern since it is resulting in great damage to the music sector and limiting the growth of a legal digital music business. According to IFPI, there were around 20 billion illegal files shared on P2P networks in 2006, which is about 20 times the number of legal music downloads.