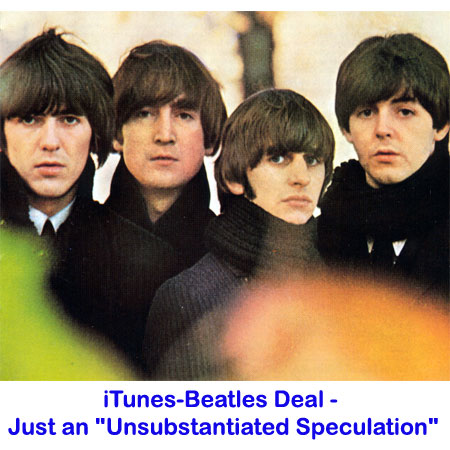 Yesterday we reported that The Beatles could be on their way to the iTunes soon. However, the latest bit is that Apple has discarded all such claims in the U.K. press stating the entire report as “unsubstantiated speculation.”

The earlier reports suggested that anonymous sources “close to Sir Paul McCartney” had confirmed that the Beatles catalog would be available online via iTunes and other legal services “within months.” Seemingly the $400+ million USD agreement would have been split between the Fab Four (Paul McCartney, Ringo Starr, the families of John Lennon and George Harrison), Sony, EMI, and Michael Jackson all of which have some rights to the songs, in various areas such as publishing, recording or reproduction.

All the same all that the Beatles’ own label Apple Corps, and EMI have all along just replied in two words – is “no comments”. An Apple Inc. rep told US publication Billboard “This is not news nor is it a scoop.”

Apparently Paul McCartney was planning to release the group’s complete collection of songs and albums onto the music website in the coming months, to counter a humungous divorce payout to former wife Heather Mills.