BlackBerry is doing its best to make BBM as good as its competitors and is currently busy introducing new features for the messaging service. The company has announced via its official blog that an update is coming soon to give subscribers more sharing options and support bigger files.

In a post on the Inside BlackBerry blog, Jeff Gadway, head of product and brand marketing for BBM revealed that very soon the instant messenger will feature the photo-sharing option in multi-person chats, allowing users to instantly send pictures to a group of people. Other options such as location sharing, sending voice notes and forwarding media from Dropbox amongst others continue to be available in group chats. 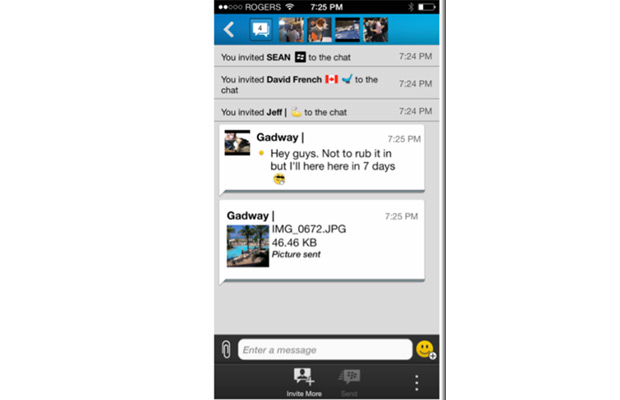 And what’s more, BBM has also increased its file size limit from 6MB to 16MB. Thus, you can now send larger files to friends on the social network. The executive mentioned above says that you will now be able to forward 16-second full HD 1080p videos. Also, some users have been demanding bigger emoticons and they will be glad to know that blackberry has paid heed to their feedback and increased the size of the smileys.

Only recently, some new security features like eBBM Suite and BBM Protected were released and we heard that BBM Shop complete with stickers is set to go live pretty soon. In February, the Canadian conglomerate had rolled out a major update for introducing Channels, Voice and some more attributes to the Android and iOS versions of the app.

The sharing features mentioned above will be beamed to BBM for BlackBerry, Android and iOS via a new update very soon.