BBM for Windows Phone available for all, but still in beta

BlackBerry had promised to bring out BBM for Windows Phone sometime in July, and it managed to do so just in the nick of time – on the last day of the month. Although it was available for a limited number of people prior to this, it wasn’t open to all but that has now changed as everyone can access the app.

However, the utility is still in beta mode which means its initial development stages are not complete, so expect some bugs coming your way if you’ll be using it. This extremely popular instant messaging software is now available on all major operating systems, including Android, iOS, Windows Phone and of course, BlackBerry’s very own platforms. 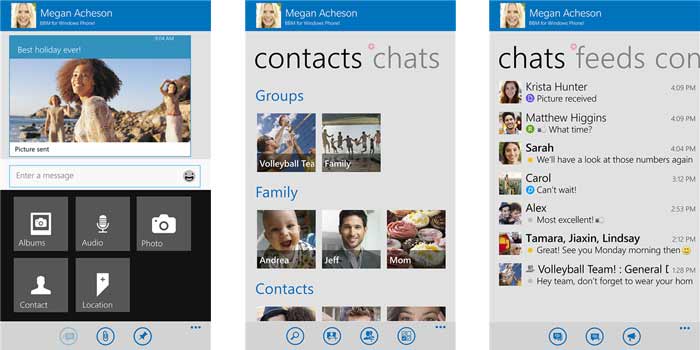 Its makers have gone on to fashion this new version’s design to match the UI of Microsoft’s OS. So, a tile-based interface with familiar fonts and other small details will make Windows Phone owners feel right at home while using the BBM app.

No new features other than the ones we’ve seen in the past have found their way into this version. In fact, it is devoid of a few important additions that other variants of BBM possess. These include support for stickers, Voice, Channels, Glympse location sharing and more.

But there’s no reason to believe that they won’t be added in the future. At the moment, what’s important is that BBM for Windows Phone is out for download and can be used on every device running the WP 8 version of the software and up.