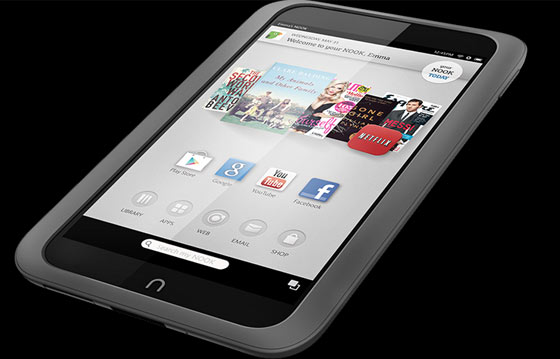 There’s no time like the present for grabbing the Barnes & Noble Nook HD and HD+ tablets. If you’re living in the UK, that is. Both devices are currently enjoying price cuts in celebration of the Get Reading festival that is being backed by Barnes & Noble and London Evening Standard.

Accordingly, the Barnes & Noble Nook HD is available for as low as £99 for the 8GB version. This is £30 more affordable than the original £129 price. On the other hand, those who want the higher capacity 16GB variant will have to shell out £129. The Android slab has a 7-inch 1440 x 900p touchscreen with 243ppi sharpness.

Its integrated battery can keep going for up to 10.5 hours of reading time or 9 hours of video before begging to be recharged. A 1.3GHz dual core processor powers the device and there’s 32GB of expandable memory on the 8GB as well as 16GB version. eBooks, magazines, newspapers and other reading content for users is hosted by the company’s virtual library, of course.

The Barnes & Noble Nook HD+ is the larger, 9-inch take on the eReader and tablet combination. It sports a more refined, squarish design as compared to its older brother. Its main specs cover a 1.5GHz dual core processor, approximately 10 hours of reading time, 32GB microSD card expandability and 16GB or 32GB internal storage. The 16GB and 32GB ones are now pegged at £149 and £179, respectively.

Both, the Barnes & Noble Nook HD+ and it’s smaller sibling, welcomed Google Play Certification in early May. Content can be downloaded over a Wi-Fi hotspot and the dual stereo speakers come into play when users want a spot of entertainment without being attached to a pair of earphones. The 7-inch tablet can be snatched up in white or gray, while the other is only available in dark gray.

The price drop on the Nook HD and HD+ is not the first time we’re seeing the company make its devices much more affordable. Back in May, the tag attached to the Simple Touch was brought down to just £29 and before that, the eReader was being offered stateside for free as part of quite a tempting deal.