It you’re seated at your PC trying to shop through the Apple online store, too bad for you. It’s not your day. You’ll be greeted by a ‘De retour bientôt. Nous mettons actuellement à jour l’Apple Store et serons bientôt de retour.’ In other words, ‘We’ll be back. We’re busy updating the Apple Store for you and will be back soon.’

But perhaps the Apple Store being shut in preparation for the iPhone 5S and iPhone 5C launch, is a small price to pay? The message is being flashed in 18 different languages and Cupertino is obviously preparing to add the iPhone 5S, 5C and whatever other product we’ll be seeing today. So in a little over three hours from now, you may find at least one new smartphone you’d rather take over whatever you were planning to buy. 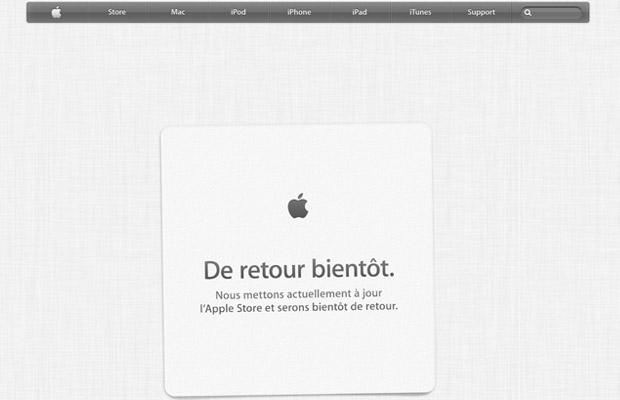 – Now we do know that the Apple event will be held at San Francisco at 10AM PT or 1PM EST today. But what exciting features should you expect the company to unveil?

– Nowhereelse.fr has ‘evidence’ of a fingerprint sensor on the iPhone 5S. This comes in the form of the packaging which shows the round home button with a ring around it being described as the Touch ID sensor too. It’s likely that this will serve as a way to unlock the handset, though it couldn’t possibly be the only way to do so.

– There have been reports that the device would have an A7 chip at its heart. We’ve heard through a tweet that it is 31% faster than the A6.

– While the 5C will apparently get a plastic shell to match its price, its more expensive sibling has been pictured in four color options. Stories of a gold iPhone 5S surfaced much before we heard about the gray one. But there you have it – black, white, gold and slate are said to be on the cards.

Excited? No point pretending we’re not.