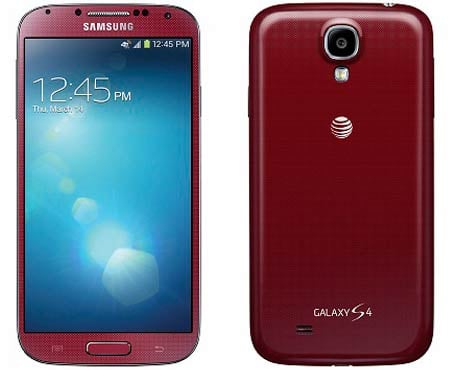 Samsung and AT&T have collaborated to introduce the Aurora red-colored Galaxy S4 in the US which has now gone up for sale for a price of $199.99. Exclusively available through the carrier in question, the variant will join the version drenched in shades of white frost and black mist.

The Galaxy S4 in red continues to offer similar specifications for the exact same price. Its front is dominated by a Super AMOLED HD touch panel of 5 inches capable of rendering visuals in 1920 x 1080p resolution. The pixel density is said to be 441ppi. Snap-happy users will appreciate a 13MP camera that has been loaded with a horde of features including LED flash, auto focus, digital zoom, slow motion video capture and many more. 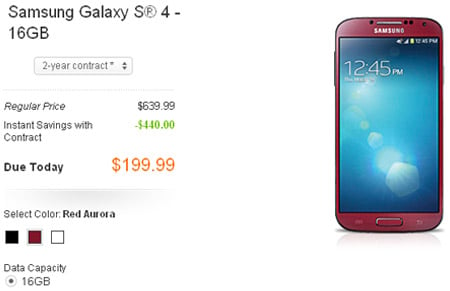 Moreover, the primary shooter can be utilized for the purpose of recording full HD 1080p videos as well. Apart from this, the S4 has been fitted with a 2MP secondary webcam. One of the key highlights of the phone is that customers can combine videos and images taken from both of these snappers, thanks to the dual camera mode. All of the captured pictures and movies can be saved on the device as it has about 16GB of onboard memory. And if it is not enough, the storage can be increased by up to 64GB with the assistance of a microSD card.

Based on the Android Jelly Bean 4.2 platform, this gadget with 2GB of RAM acquires multitasking properties from a quad core Qualcomm processor clocking in a maximum speed of 1.9GHz. Since nothing has changed in the Galaxy S4 in Aurora red, the chassis obviously still measures 5.38 x 2.75 x 0.31 millimeters and tips the scales at around 4.59 ounces. And as a 2600mAh battery hides under the hood, the handset can be expected to cough up the juice for talk time of close to 17 hours on a single charge. Its standby time is said to be around 12.5 days.

The Samsung S4 can now be pre-ordered through AT&T for a price of just under $200 along with a two-year customer agreement and a qualifying data plan. 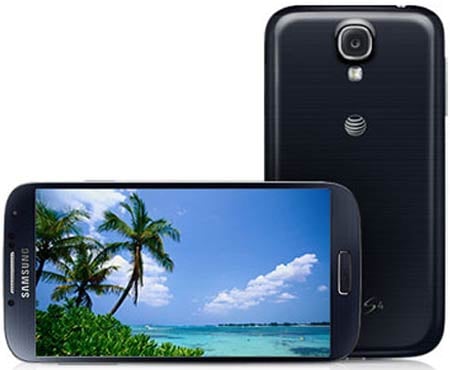 Key specifications of the Galaxy S4: