Just yesterday, Samsung announced that it will offer the Wi-Fi Galaxy Note Pro and Tab Pro slates in the US. The company also noted that a 4G LTE model of the former will be available by the end of next month for Verizon. Previous rumors suggested that the tablet will also arrive through AT&T, but no confirmation had been provided by the Korean conglomerate.

Well, if you’re looking to snatch a 4G LTE model and prefer a carrier other than Verizon, the AT&T version has been somewhat confirmed by the FCC. The tablet was recently spotted by Engadget carrying support for LTE and HSPA+ frequencies that’s used by the provider in question. Also, it should work well with multiple carriers in Canada. 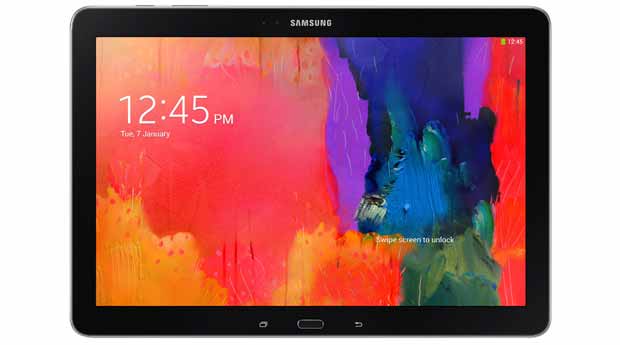 In other news, the Verizon version of the Samsung Galaxy Note Pro 12.2 has been leaked on twitter by EvLeaks. The press shot shows the tablet in black carrying the carrier’s branding on the rear (surprisingly it has only one). The device comes with a WQXGA LCD panel and it features a quad core Snapdragon 800 processor from Qualcomm. The Wi-Fi models pack an Exynos 5 Octa SOC instead.

Android 4.4 KitKat is available out of the box along with various features. They include enhanced Multi Window that divides the display into four parts to run multiple apps simultaneously and various S Pen tools like Air Command, Action Memo, Scrapbooker, Screen Write, S Finder and Pen Window amongst others.

No release date has been leaked for the Galaxy Note Pro 12.2 for AT&T, but you can expect it to arrive soon after the Verizon model goes on sale next month.

Here are the tablet’s specifications: