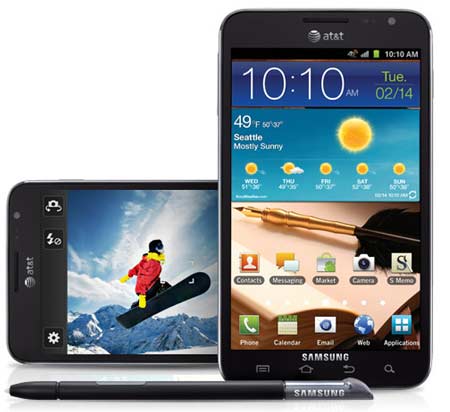 As announced earlier this month by the network operator, the AT&T Samsung Galaxy Note is all set to arrive in February. The company has even set a date for it, putting an end to the anticipation of several enthusiasts. The device will be made available in the U.S. through the carrier starting February 19.

The Note was mostly in the news for its 5.3-inch HD Super AMOLED touchscreen with a display resolution of 1280 x 800p, which makes it appear like a cross between a smartphone and a tablet. This hardware is accompanied by an S pen stylus which facilitates taking notes, sketching, writing emails, and more on the device. Users can pick from color options like ceramic white or carbon blue.

“The Galaxy Note brings a new level of efficiency to busy customers who would normally rely on multiple devices,” commented Jeff Bradley, senior vice president, Devices, AT&T Mobility and Consumer Markets. “This new breed of smartphone helps consumers accomplish more with a single device than ever before. The unique all-in-one experience can simplify daily life while tapping into AT&T’s 4G LTE network to let customers work even faster.”

While describing the list of compatible accessories, the network operator mentions a desktop dock, a protective flip cover case available in various colors, an S pen holder kit and other such peripherals for the smartphone. Although the handset is being released in the second half of February, prospective users can secure one for themselves starting February 5. Early birds whose orders are processed on or before the 15th of that month, will be entitled to receive the shipment by February 17.

The AT&T Samsung Galaxy Note price is revealed to be $299.99 and it comes bundled along with a two-year user agreement.