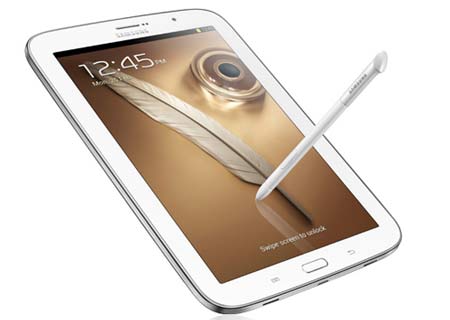 The AT&T Samsung Galaxy Note 8.0 release date has been disclosed along with its price. Additionally, AT&T plans on making the Samsung slate available in 2 options, one standalone and the other bundled with a smartphone.

We knew that the Samsung Galaxy Note 8.0 (read our review) was headed to the provider and all we needed were precise launch details which were left out when the device was announced last week. The slate will proffer 4G LTE connectivity and will be exclusive to AT&T in the US. The Wi-Fi only version on the other hand, has been available for a couple of months now through various retailers.

The Samsung Galaxy Note 8.0 is designed for business users. It comes with the trademarked S Pen which enables enhanced features like inserting handwritten text and creating sketches. What’s more, it’s loaded with SAFE technology, and Polaris Office for editing documents. There are various other services and tools onboard as well, with the Android 4.1 platform. They include WatchON, Reading Mode, Multi Window and Air View amongst others.

AT&T is offering buyers 50GB of free storage on its Locker service for conveniently backing up videos, pictures and other data. The Samsung Galaxy Note 8.0 is highly portable and lightweight. It weighs around 345 grams and measures 7.95mm thick. An 8-inch HD TFT touch display is fitted on the front with a 1.3MP camera, while the rear plays host to a 5MP AF snapper for video recording and capturing images. On the inside, there’s a quad core 1.6GHz Cortex A9 processor, 2GB of RAM, 16GB of storage with expandability up to 64GB, and a 4,600mAh battery.

The Galaxy Note 8.0 LTE version is scheduled to be released on June 21. Apart from the smartphone bundle where the device’s price is listed as $199.99 when coupled with a Galaxy S4, S4 Active or Note 2, the tablet can be picked up alone for $399.99 with a two-year agreement.