As promised, the AT&T Samsung Focus 2 4G LTE has now been made available in the US for a budget-friendly price of under $50. A sequel to the previously released Focus smartphone, it runs on the Windows Phone 7.5 platform and extends support to the 4G LTE network for relatively fast internet access.

The handset’s front panel is adorned with a 4-inch WVGA Super AMOLED multi-touch display of 480 x 800p resolutions. Its ability to multitask can be attributed to the Qualcomm processor that clocks in a speed of 1.4GHz. This phone’s rear panel is graced by a 5MP primary camera, which possesses features like LED flash, auto focus, 4x zoom and 720p video capturing capability amongst others. A front-facing webcam has also been provided for video calling purposes.

The Focus 2 with dimensions of 4.79 x 2.47 x 0.43 inches, weighs not more than 4.3 ounces. It ships with 8GB internal memory and draws power from a 1750mAh battery that coughs up the juice for talk time of about 6 hours at a stretch. The communication options offered by this smartphone are inclusive of Bluetooth and Wi-Fi, and it can also share the 4G LTE network with up to 4 mobile devices. 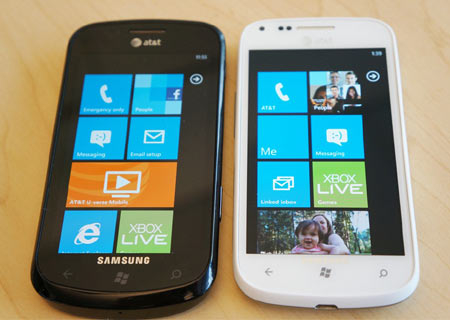 Besides social networking websites like Facebook, LinkedIn and Twitter, the Focus 2 comes pre-loaded with Xbox Live to facilitate gaming on the move and Internet Explorer 9 for web browsing. Some other applications like Microsoft Outlook, Bing Search and Office Mobile have also been pre-installed on it.

The AT&T Samsung Focus 2 4G LTE price and availability details divulge that it is now up for grabs through the official carrier website for $49.99. It requires a two-year customer agreement and qualifying data plans.