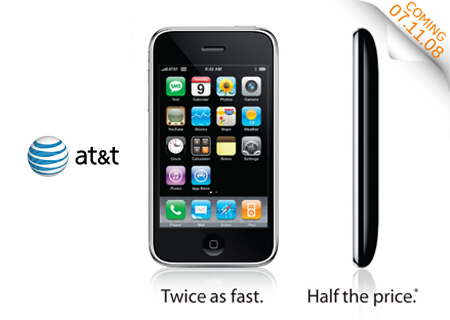 First it was Telstra that the revealed the prices it had set for 3G iPhone in Australia. This times its AT&T. However the advanced phone seems to be priced at the same rates that were announced at the WWDC 08.

First of all, you need to possess an iPhone that you have purchased before July 11, the launch date of the 3G model.

Secondly, to be the phone’s customer you will have to activate your subscription with AT&T.

AT&T will be offering the touchphone without any strings attached at $599 and $699 for the 8GB and 16GB capacities respectively.

The AT&T subscribers who want to upgrade their contract will have to cough up $18 more as an upgrade fee and the new customers will have to shell out $36 as the activation fee.

There are a few more plans offered by AT&T, known as the AT&T Nation Plans:

All of the AT&T Nation and AT&T FamilyTalk plans consist of calls made for nationwide long distance and roaming, Visual Voicemail, Rollover, unlimited Mobile to Mobile calling, Call Forwarding, Call Waiting, Three-Way Calling and Caller ID. The FamilyTalk plans with voice and unlimited data starts at $129.99 a month for two iPhone 3G lines. Maximum three additional iPhone lines can be added for $39.99 each.

For unlimited text messaging the charges are $20 ($30 for FamilyTalk plans of up to five lines); $15 (1,500 messages), or $5 (200 messages). Business customers can enjoy the Enterprise Data Plan for iPhone at $45 per month for business applications and corporate emails. Small-businesses can take up the AT&T BusinessTalk, the shared plan specifically for small businesses. More information for business plans can be obtained from www.att.com/iphoneforbusiness.