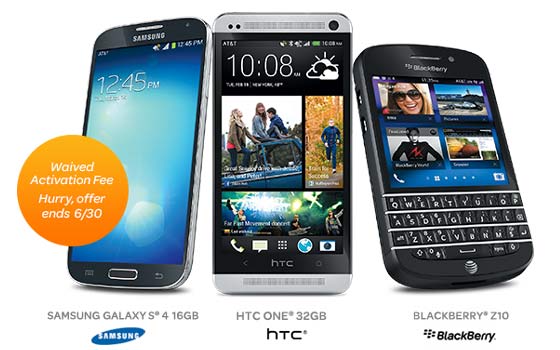 AT&T has started a new promotion where it’s offering a flat 50% off on all phones that fall between the $0.99 and $199.99 mark. To be eligible for the discount, buyers are required to sign up for a 2-year contract and the device must be purchased through the provider’s online store only.

Additionally, customers will be able to get a further reduction on the new amount by using the online Trade-in Program which is valid for select handsets, to acquire a promotion card. What’s more, potential buyer will be able to trade-in their handsets at one of the carrier’s stores and get $100 off on any smartphone with a fresh agreement of 2 years. This option, however, doesn’t fall under the aforesaid discount promo.

The procedure to get one of the latest smartphones at 50% off is quite simple. Buyers will have to head over to the carrier’s website and choose the device they prefer which must fall between $0.99 and $199.99. The discount is said to be visible in the cart. The offer can be availed on the S4 as well as its water-proof Active variant, the BlackBerry Q10 and the HTC One amongst others. The QWERTY BB10 handset packs in a Qualcomm S4 dual core processor, while the others are all powered by the Snapdragon 600 SOC and feature other high-end specifications. 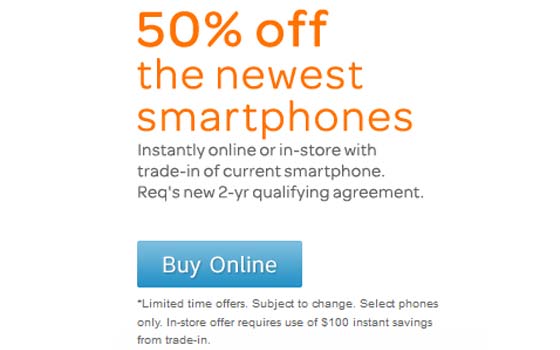 Each aforementioned choice is originally tagged at $199.99 and after the 50% discount, the payable amount will be $99.99. We recently reported about the iPhone 5 being available through Walmart for $127. The AT&T promotion will make the 16GB handset available at an even lower retail sum of $99.99 with a 2-year contract.

The 50% discount on all smartphones below $200 through AT&T is a limited time only deal. According to the carrier, the offer will end on June 30. A post on 9to5Toys highlights that the price will include shipping and the activation fee has been waved off.