The Nokia Lumia 1020 went up for pre-order in the US earlier this month through AT&T and the device that already started shipping, is now available exclusively through the service provider’s official website. This Nokia Lumia smartphone comes splashed in three shades of black, white and yellow, all of which are up for grabs through the carrier in question.

Those interested in laying their hands over the flagship Nokia Lumia 1020 will have to shell out just under $300. It goes without saying that they are required to sign up for a user agreement of two years as well as a qualifying data plan. The smartphone is yet to hit the company-owned retail channels, but nothing has been mentioned about its availability through stores as yet. Nevertheless, the device is listed on select online retailers in the country as well, one of them being Best Buy. The unactivated version of the gadget is slapped with a retail tag of just under $750 through this shopping portal. 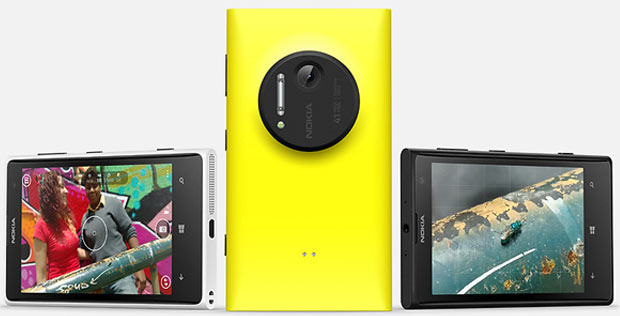 Coming to the specifications of the Nokia Lumia 1020, it is the first ever Windows Phone 8-based gadget to flaunt a 41MP camera sensor with PureView technology, image stabilization and a Carl Zeiss Tessar lens amongst other features. A secondary 1.2MP webcam has also been thrown into the mix for facilitating video conferencing.

Fitted with a 4.5-inch ClearBlack AMOLED touchscreen with a pixel density of 334ppi, the Nokia Lumia 1020 manages to render visuals in 1280 x 768p resolution. It acquires steam from a dual core 1.5GHz Qualcomm Snapdragon S4 processor as well as 2GB RAM and provides 32GB internal memory along with 7GB of SkyDrive cloud storage. Also, the handset’s 2000mAh power pack is responsible for keeping it charged for talk time of about 19.1 hours in the 2G mode. 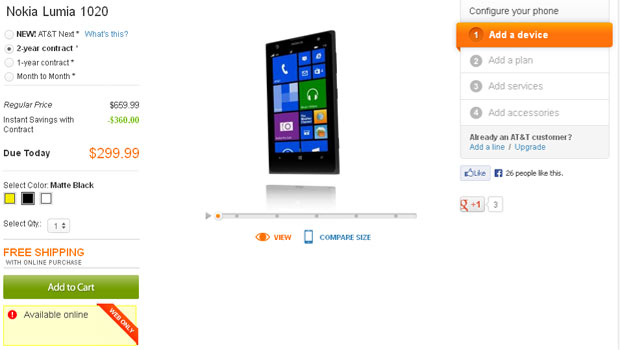 As we already mentioned, the Lumia 1020 can now be purchased through the carrier’s website for an on-contract price of $299.99.