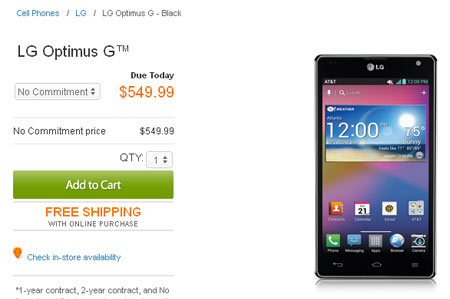 The LG Optimus G is now available for purchase through AT&T in 3 options, with a 1-year contract, a 2-year agreement or on a no-commitment basis. The device is the South Korean conglomerate’s latest flagship handset and it packs in a catalog of high-end components, some are manufactured by sister companies such as Chem, Display and Innotek.

The device is amongst the first to arrive with a quad core processor from the Qualcomm Snapdragon S4 Pro lineup. It features a 4.7-inch True HD IPS+ display for visuals and flaunts a high-gloss tempered glass design that measures 8.45mm thick. Unlike the Sprint variant which has a 13MP camera, the AT&T-bound version is equipped with an 8MP AF snapper with LED flash. There’s also a 1.3MP front-facing lens which can capture videos in 720p HD. The device is 4G LTE enabled and users will be able to share their data connection with others over Mobile Hotspot. The included 2100mAh Li-Polymer battery is capable of delivering up to 10 hours of talktime or approximately 13.5 days of standby.

Jogging down memory lane, the Optimus G first made its appearance in the form of leaks. LG took the liberty of disclosing various features the handset packs in. But instead of using the proper moniker, it referred to the phone as the next generation smartphone. It wasn’t long before the device was officially announced. And recently, it managed to reach the rumor mill a second time in the form of the Google Nexus 4 which was then speculated as the Optimus Nexus and LG Nexus amongst others.

The LG Optimus G can be picked up for $199.99 with a 2-year commitment or $449.99 with a 1-year agreement. The off-contract price amounts to $549.99. All 3 options require a compatible voice plan with a qualifying monthly data subscription. 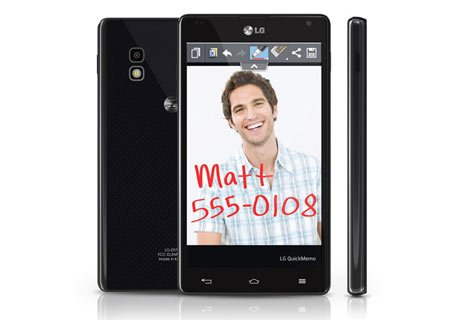