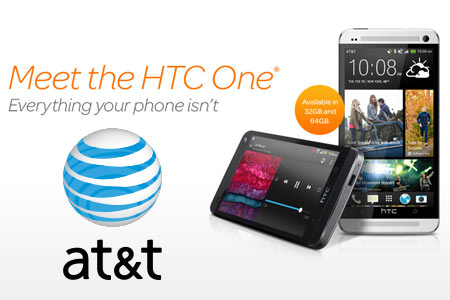 AT&T has revealed that the latest HTC handset, the One, has been given a release date of April 19, and the company has announced the prices of both the 32GB variant and the carrier-exclusive 64GB version. Interested customers can pre-order the handset starting today April 4 at 1:00PM central time.

The phone will run on the carrier’s fast 4G LTE network and can be purchased in black and silver. In terms of hardware specs, there is a 1.7GHz quad core Qualcomm Snapdragon 600 processor for quick response even when running many apps. To help at the task, 2GB of RAM has been included, ensuring that things are kept smooth.

An ‘UltraPixel’ camera finds itself on the back and has just a 4MP resolution, but uses larger pixels that are supposed to let in about 300 percent more light. In contrast, a 2.1MP webcam is fitted on the front and can be used for video calling. The display is a 4.7-inch touch screen capable of throwing out images and video at a resolution of 1920 x 1080 pixels.

Android Jelly Bean is the OS of choice, while the new Sense 5 UI has been added for a deeper experience. Speaking of which, the phone will bring along the company’s new BlinkFeed feature which allows users to have a live stream of content on their home screen. They can choose the stuff that will appear, and can even take the entire thing off if they want, sticking with a more traditional view.

Other software attributes infused into the aluminum unibody gadget include the ability to capture ‘Zoes.’ This means users can have a more vibrant gallery with tiny moving clips containing audio. All that power is backed up by a host of connectivity options as well as a 2,300mAh battery.

The 32GB HTC One will be made available for $199.99 and the 64GB model exclusive to AT&T will set buyers back by about $299.99, with a 2-year contract. Additionally, it will come with a few carrier-specific apps.

The specifications have been given below.