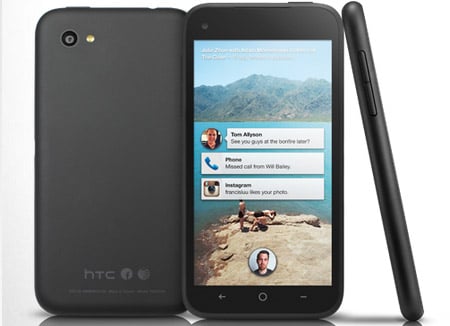 AT&T ahave been quick to announce the HTC First release date as well as price details for those eager to lay hands on the all new Facebook phone. Getting the essential information out of the way – it can already be pre-ordered through the carrier’s official website for $99.99 and a 2-year contract. The launch day is set for April 12.

The ‘social network device’ is clearly meant for the masses, judging by the tag attached to it and specs. A dual core 1.4GHz Qualcomm 8930AA processor, 1GB LPDDR2 RAM and Android 4.1 deliver the juice here. Though Home is mentioned as the platform in the same space as Jelly Bean, any handset can be a Facebook phone. But we’ll get to that bit in a moment.

A 4.3-inch 1280 x 720p touchscreen is stretched across the smartphone’s front and the camera above it is a 1.6MP one. Staying in tune with the mid-range features, the main snapper on the rear panel is a 5MP lens with full HD video recording capabilities. Lastly, the onboard hoarding room amounts to 16GB and a 2000mAh Li-polymer battery keeps the device powered on.

Coming to the more interesting part of the unveiling, Facebook Home, it’s not a forked version of Android. But the developers have practically rewritten our idea of a downloadable app with this one which has Cover Feed as its highlight. The feature is basically a live Facebook Home stream which springs onto the screen the moment users switch on their device.

‘Liking’ a post or photo is as simple as double tapping it right from this stream. Then there’s Chat Heads, an element which allows users to chat with friends even while emailing, being engaged in other applications or browsing the web. Another thing worth mentioning is the integration of Notifications for texts, mails, calendars, missed calls and so on, right on the home screen. 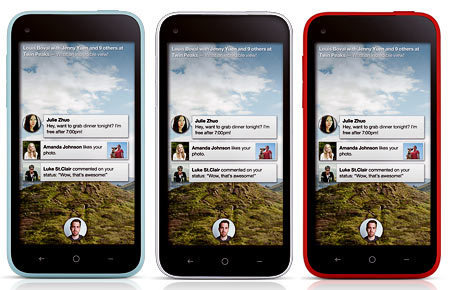 The application will be available for download through Google Play starting from April 12. It is expected to be compatible with the One/One X/One X+, Galaxy S4/S3 and Note 2. Get the picture? The device in question is not a Facebook phone. It’s a phone with Home pre-loaded onto it. One thing that bothers us is the uncomfortable notion of having all our social feeds open to prying eyes since Cover Feed is the lock screen too.

For those with long term commitment issues, the HTC First can also be pre-booked from AT&T on a month to month basis at the standard rate of $449.99. Then there’s the 1-year service option which will have buyers shelling out $349.99.