AT&T HTC 8X price tagged at $100, up for pre-order through Best Buy 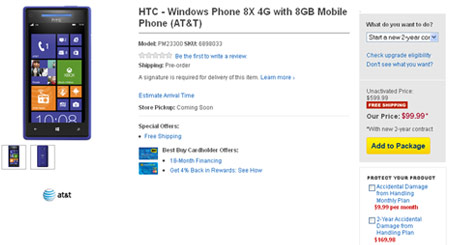 The AT&T HTC 8X smartphone’s price and release date details may not have been revealed by the carrier, but those who wish to take advantage of the upcoming OS can reserve this WP phone through Best Buy. It is now up for pre-order and will start shipping as soon as it is available.

According to wpcentral, Best Buy had even put the Nokia Lumia 920 up for sale, but it was removed from the website for undisclosed reasons. As far as the 8X is concerned, the handset in question operates with the help of the Windows Phone 8 platform and is capable of running the carrier’s 4G LTE network. Its front panel is dominated by a 4.3-inch touchscreen that claims to offer high definition visuals in 720p resolution. A Corning Gorilla Glass coating over the LCD 2 display helps resisting scrapes and scratches. 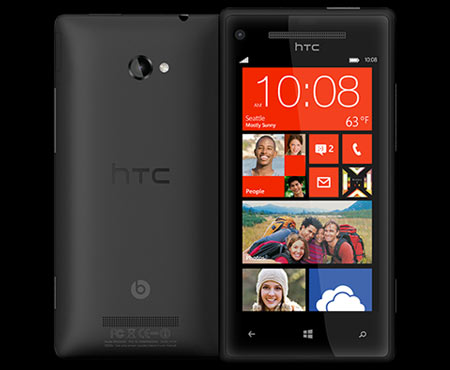 A 1.5GHz dual core Qualcomm S4 processor teams up with 1GB of RAM to make the phone capable of carrying out multiple tasks at the same time. It ships with 8GB internal memory and features an 8MP primary camera along with a front-mounted 2.1MP webcam that can record 1080p videos. Attributes like ImageChip technology, LED flash, auto focus, a BSI sensor and more should work towards reproducing decent quality images.

There’s NFC, Bluetooth, Wi-Fi and GPS along with connectivity options like a USB port and a 3.5mm audio jack. A 1800mAh lithium-ion battery is responsible for offering talk time of close to 11 hours on a single charge. Moreover, it even keeps users entertained on the move, thanks to integrated Beats Audio and support for multiple A/V formats like MP3, WAV, MP4, 3GP and many more.

The HTC 8X can now be pre-ordered for $99.99 with a two-year customer agreement from AT&T and qualifying data plans.