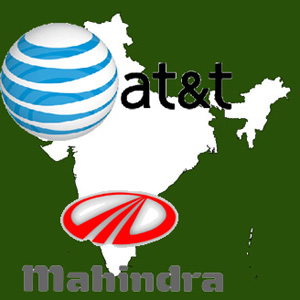 US-based telecom giant AT&T has announced that their Indian unit has applied for licenses to provide services in India. The company is collaborating with Mahindra Telecommunications for this application filed for 22 of the 23 telecommunication circles.

Interestingly, AT&T had forayed into the Indian market more than 8 years ago, but then in 2002 it departed from the mobile services venture which was known as Birla-AT&T-Tata at the time.

Now, AT&T has forayed into the telecommunications arena once again as the company applied for a pan-India license on the very last day for the Department of Telecommunication to receive applications for telecom licenses which was set for October 1, 2007.

AT&T has applied for this pan-India license in order to offer telecom services in all 22 circles of India.

In an official statement, AT&T said that it would be partnering with mahindra Telecommunications, a subsidiary of Mahindra Group for its entry in the mobile carrier market.

Mahindra representative Ulhas Yargop commented on their partnership with mobile carrier AT&T saying, “The basic point is that AT&T wants to enter the business in India, obviously AT&T sees a big opportunity.”

AT&T now holds a 74% stake in the partnership with Mahindra telecommunications. The company describes it comeback into the Indian market as ‘an important step towards participating in India’s upcoming spectrum allocation proceeding.’