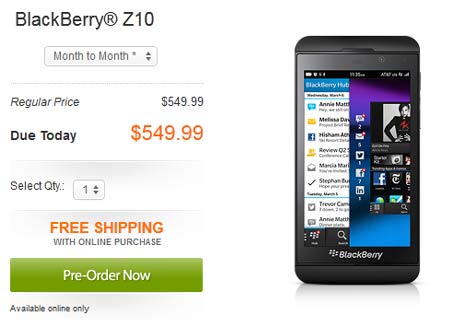 We’ve finally got a price for the BlackBerry Z10 in the US through AT&T which is $199.99 on a 2-year contract and unlike T-Mobile’s approach to make it available initially for business customers, the carrier in question is offering the phone to all potential buyers. Starting today, those interested can head over to the network provider’s website and pre-order the phone.

The Z10 is the first ‘re-designed, re-engineered and re-invented’ smartphone to roll out powered by the BlackBerry 10 platform which is said to deliver a new mobile experience compared to its predecessors. Some of the main highlights include Hub which poses as a central location for accessing conversations and emails and the Time Shift mode that allows users to capture an ideal picture by taking images before and after the shutter is pressed. 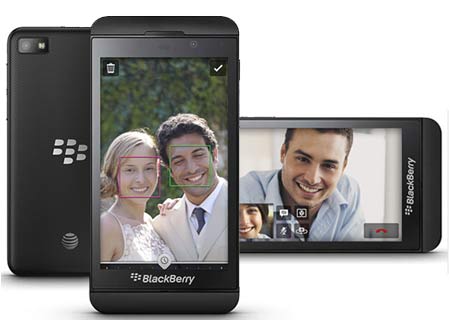 The company has also included its new touchscreen keyboard that’s said to learn and adapt to how a users write for accurate input. With Story Maker, videos and photos can be sewed together to create a personal movie, while the Balance technology keeps all content secure while connected with to BlackBerry Enterprise Service 10. The carrier has thrown in some of its own applications as well. They comprise of FamilyMap, myAT&T and Mobile HotSpots.

The handset is 0.35 inches thick and it weighs just about 4.8 ounces. The front is layered with a 356ppi 4.2-inch HD touchscreen and a 2MP camera that can record videos at 720p, while the rear sports an 8MP snapper with AF and an LED flash. Coming to the inside, a dual core Krait processor clubbed with 2GB of RAM and a removable 1800mAh battery get things up and running. The device can deliver up to 10 hours of talktime or approximately 13 days of standby.

Apart from AT&T, the BlackBerry Z10 can also be pre-ordered in the US through Best Buy starting today. The release date for the smartphone through the carrier is scheduled for March 22. Additionally, buyers can pick up the handset with a 1-year contract for $449.99 or on a month-to-month subscription at $549.99 with a qualifying data plan. 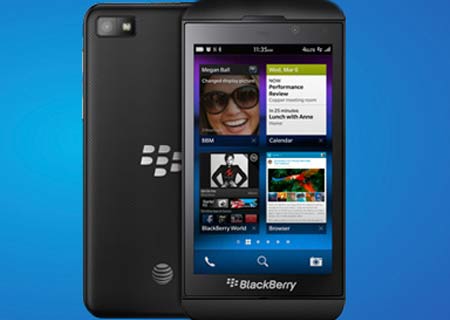 Here’s a peek at the phone’s specifications: