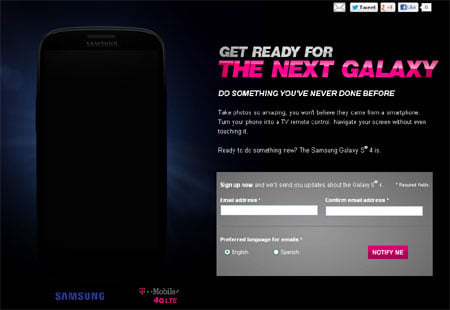 It seems the Samsung Galaxy S4 will come to AT&T and T-Mobile in the US; it’s just not known when exactly. The two carriers have announced that those interested can submit an e-mail address and will be notified via the same, when the smartphone becomes available. It’s also possible that those who’ve signed up will be alerted when the device goes up for pre-order, and though this seems likely, is not confirmed.

The Galaxy S4 is the Korean manufacturer’s next big thing and was announced recently in an over-the-top event held in New York. Much hype preceded said event, even as it wasn’t then revealed what exactly was being unveiled. But it was pretty obvious. Now that T-Mobile and AT&T have confirmed that it is coming to their networks, one of the only things left for us to find out is a concrete release date. 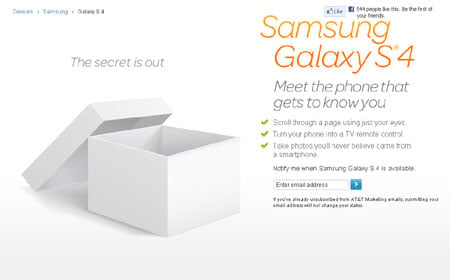 Let’s take a look at a few features that the GS4 has to offer. For starters, on the hardware front, it will sport a 5-inch full HD Super AMOLED screen that displays visuals with a pixel density of 441ppi. Based on region, there should be either a 1.9GHz quad core processor or a 1.6GHz 8-core chipset. A 13MP camera slots in as primary, while a 2MP webcam makes itself comfortable on the front. 2GB of RAM is a necessary addition, while a choice between 16GB, 32GB and 64GB of internal memory has been provided. Rounding up the specs is a 2,600mAh battery as well as Wi-Fi, NFC, Bluetooth 4.0 (LE) and even an IR LED for use as a remote control.

In terms of software features, users will be able to capture content using both cameras simultaneously. This is supported by a dual camera function even when engaged in video calls. Then there is S Translator, which helps communicate in foreign languages. Smart Pause and Smart Scroll are some of the most attractive inclusions, and allow for seamless viewing of videos and reading of text on the smartphone, respectively. And the list goes on. S Voice Drive, Air View, Air Gesture and Optical Reader are only a few of the remaining software functions.

And even though it is known that the Samsung Galaxy S4 is headed stateside through the carriers mentioned above, a time frame for launch is not known, and neither is pricing.