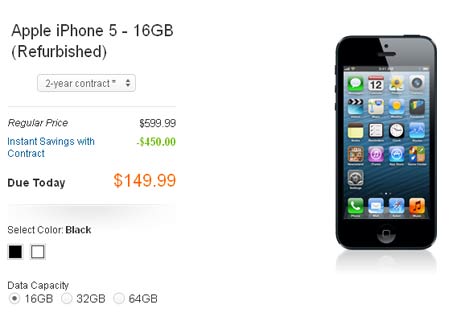 A $99 iPhone 5 from AT&T appears to be a pretty good bargain, but just to make things clear, the carrier is selling refurbished units and not sealed-tight packages. What’s surprising here is that Apple’s latest smartphone has been on sale for nearly 2 months now and people have already started returning it in.

Just like its predecessors, the most recent handset from Cupertino has witness a fair share of fame and problems. The prime technical issue in the device is related to the camera where a purple haze is reported to show up in images which are pointed at a bright light source. Well, Apple states that the behavior is normal and apart from a few guidelines to minimize the effect, no fix has been issued till date. Back in September, a complete cost analysis on each part employed within the phone was detailed out, denoting that the iPhone 5 materials are worth not more than $168. 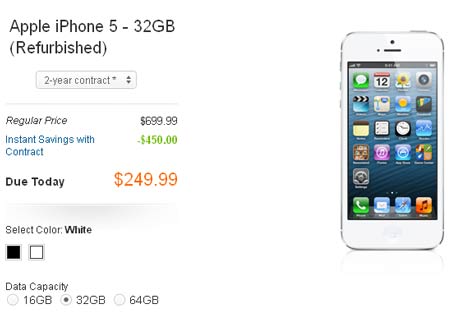 Running the show here is the iOS 6 platform that’s powered by a dual core A6 SOC. The phone is wrapped with a 4-inch Retina multi-touch display proffering an 1136 x 640p resolution and a fingerprint-resistant oleophobic coating. The front also features a 1.2MP FaceTime HD camera, while the rear houses an 8MP iSight snapper with LED flash. On a single charge, users can expect around 10 hours of video playback, up to 40 hours of non-stop music listening or approximately 10 hours of web browsing over Wi-Fi.

The $99 iPhone 5 is only available online and not through AT&T retail stores in the US. It carries 16GB of storage and comes it color options of black as well as white. The carrier has also made available 32GB and 64GB refurbished versions of the latest Apple iPhone. They’re currently selling for a $249.99 and a $349.99 price tag, respectively. A voice agreement with a qualifying monthly data plan is mandatory as well. The guys over at 9to5Mac state that the offer could be a temporary promotion and not a regular sale. 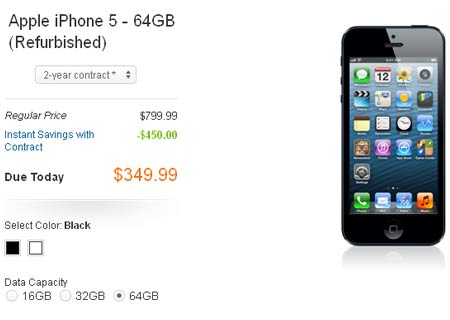