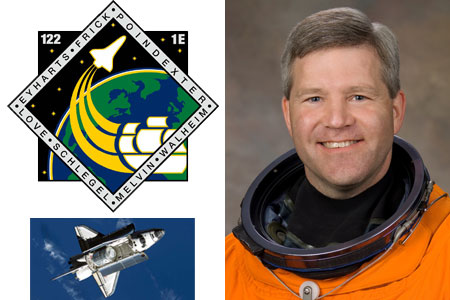 Earlier this week, we had reported that National Aeronautics and Space Administration (NASA) had held a ceremony to remember those who had laid down their lives in the quest of space exploration. Now the American space agency will gear up for its next mission.

NASA has fixed the twice-delayed flight of the space shuttle Atlantis, which is all ready to set off tomorrow from the Kennedy Space Center in Florida. Atlantis will make a trip to the International Space Station (ISS) as it is carrying a major addition for the orbital outpost. The space shuttle will be on an eleven day mission. The new Columbus science laboratory by European Space Agency (ESA) will be attached during this mission.

The seven member crew will be headed by Stephen Frick, Atlantis’ commander. He stated, “We can’t afford to let the engines run dry because they tend to come apart. The sensor problem has been nagging us for quite a long time. We were able to pull the hardware out, find out what the problem really is and get a chance to fix it properly so we don’t have to worry about it.”

The Atlantis mission has been delayed twice due to the jagged readings from four sensors at the underside of the space shuttle’s huge external fuel tank. Besides this, there was also a technical issue, something related to a bent radiator hose. N. Wayne Hale Jr, who is the director of the space shuttle program, has confirmed that both these problems have been resolved.

The Atlantis space shuttle is scheduled to be launched at 2:45 p.m. Eastern time. However, NASA is keeping a close lookout for the weather. Forecasts point to a 40 percent chance of favorable weather.

Besides Stephen Frick and Pilot Alan Poindexter, the crew comprises of Leland Melvin, Rex Walheim, Hans Schlegel, Stanley Love and Léopold Eyharts. However, ESA astronaut Eyharts will stay on the ISS to supervise the experiments. Daniel Tani who is on the orbital outpost from October will come back along with the rest of the crew.