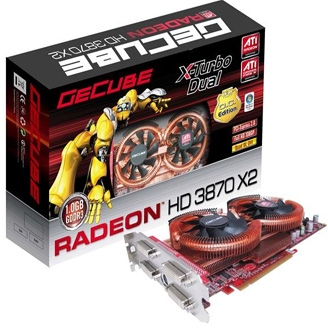 The X2 graphic card has been targeted at PC users who want high-end graphics as it supports Microsoft’s DirectX 10.1 gaming platform.

The ATI Radeon HD 3870 X2 GPU happens to be the first in the industry to break the Teraflop (one trillion floating point operations per second) barrier. This graphics processor nearly doubles the performance of the award-winning ATI Radeon HD 3870 GPU that was unveiled last November.

AMD’s multi-GPU technology has been designed to support up to four GPUs! Built using the 55 nanometer process, the ATI Radeon 3870 X2 also blends in two ATI Radeon HD 3870s on a single graphics board which are connected via integrated CrossFire technology.

According to Rick Bergman who spoke at the launch of this hardware, “With this launch, we reaffirm our commitment to enthusiast performance leadership and send a clear message that the ATI Radeon 3870 X2 is the new gold standard of the PC gaming world.”