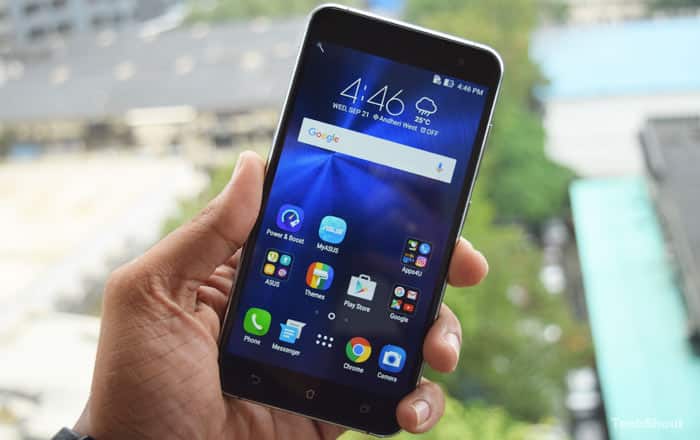 One among the many ZenFone 3 models out there is the main mid ranger with a 5.5-inch display, 4GB of RAM, 64GB of expandable storage and an octa core Snapdragon 625 processor. This is the model (ZE552KL) we have with us today here. Now, it’s very obvious that a price tag of Rs 27999 will make you a bit skeptical, because the OnePlus 3 sells at the same price and offers a Snapdragon 820 chipset and 6GB of RAM, whereas the Xiaomi Mi 5 is offering the 820 chipset at a much lower price of Rs 23000. And it doesn’t help that all three of these phones have the same camera sensor – the Sony IMX298. So, the Asus ZenFone 3 does have a slightly confusing price tag. But the sales pitch of Asus has a laid good amount of focus on its intricate design. The company has taken a glass-heavy approach here, and this does give it a premium appearance when looked at from a distance. But what’s it like up close, and does it manage to please you enough to justify its price tag? Let’s find out.

We took the phone out of the box, and the first thing we realized is exactly what we just talked to you about. Asus really has put in a lot of effort in getting the design right. The ZenFone 3 feels like an extremely premium smartphone to hold, no less than the flagships that companies like Samsung have on offer. In fact, for those who use the Plus-sized iPhone models, the feel in the hands is surprisingly similar. The Asus ZenFone 3 has a densely packed and firm construction and rock-solid volume and power keys. There’s 2.5D Gorilla Glass 3 on the front and back both, and this makes it an extremely slippery device, so make sure you don’t place it in slanting positions as it’s most definitely bound to slide off. It won’t easily slip out of your hand though, thanks to the metal frame which has been sandblasted to give it a matte effect. This really tells us how much thinking has gone into the design of this smartphone. 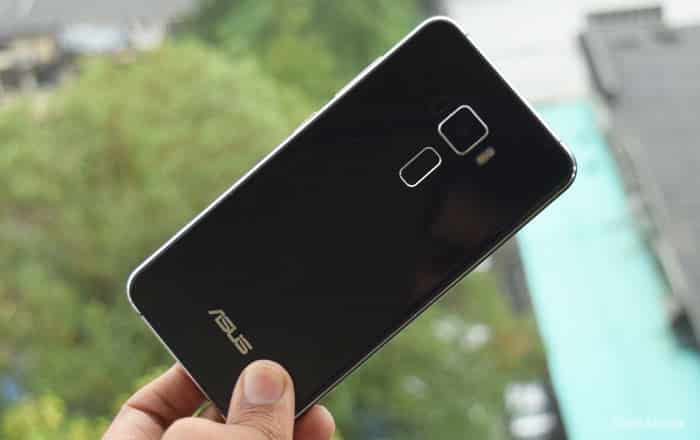 At 7.7mm it’s not the thinnest of devices, but it does have a 3000mAh battery to explain that thickness. With the ZenFone 3 series, Asus has finally taken the USB Type-C leap, and it even comes with a fast charger in the box. The extremely attractive rear surface of this phone has a 16MP main camera which protrudes out of the body a little. And since it’s made of glass, it’s a big fingerprint magnet. There’s laser autofocus, a dual tone flash and a fingerprint scanner flanking it. This gives the rear surface a very attractive appearance. As for the front surface, it’s pretty standard with a small-bezel screen, an 8MP camera at the top and capacitive navigation keys at the bottom. To sum it up, the ZenFone 3 has got almost everything right in the design department. We’d go so far as to say that it sits among the most neatly designed smartphones out there.

Sitting beneath the 2.5D Gorilla Glass 3 screen of the ZenFone 3 is a 5.5-inch 1080p display. The resolution is not a surprise, but what’s really intriguing is that Asus has kept the same resolution for even its highest-end ZS570KL model which ships with a Snapdragon 821 chipset inside it and is priced at a whopping Rs 62999. Anyway, let us focus on the ZE552KL model for now. It has a Super IPS+ LCD panel which can go as far as 600nits in terms of brightness. Also impressive are its viewing angles and outdoor visibility. We faced absolutely no problems while using it under direct sunlight. One more thing worth mentioning is that the display applies a parallax effect to all your wallpapers to make them more dynamic. 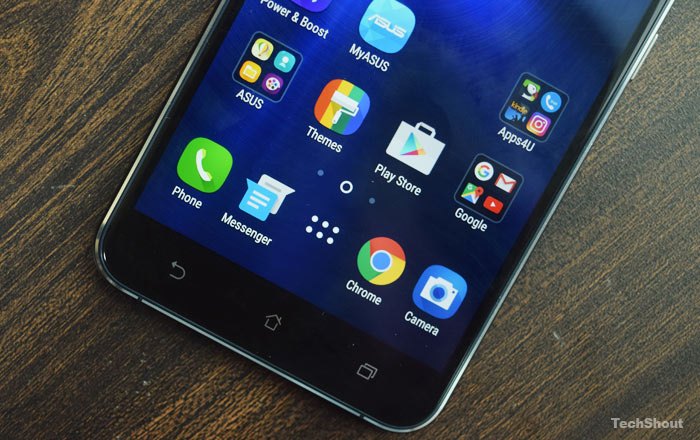 Speaking of the sound coming through its bottom firing speakers, the volume is quite impressive. But sadly the same cannot be said about the sound quality. The music coming through these speakers sounded a bit held back for some reason; almost as if the full potential of the songs wasn’t being explored. And the built-in equalizer didn’t help a great deal. But then again, if you’re going to listen to music only through your headphones, this should not be an issue for you at all.

The ZenFone 3 of course features Asus’ ZenUI on top of Android Marshmallow. The interface is something that you’ll either love or hate, which is the case with almost all Android skins these days; so we won’t be talking much about that. However, we will tell you that there are tons of customization options available here. You can lock apps, change the icon alignment, tweak the scroll effect, select fonts and colors and much more. You can either make the changes yourself or download pre-made themes from the curated Themes app.

Furthermore, Asus has maintained its ZenMotion functions which are quite useful for those who take advantage of them. You can launch apps directly from sleep mode. For instance, drawing a ‘C’ on a black screen will unlock the phone and directly launch the Camera app. There’s also things like the One Handed mode, the Kids Mode and the Easy Mode, all of which can be found in many Android skins out there. A great new addition is Game Genie which launches automatically when you start a game. It lets you capture screenshots and videos and even broadcast live videos to Twitch and YouTube. That’s quite a feat. There’s even a search option for viewing video walkthroughs without leaving the game. 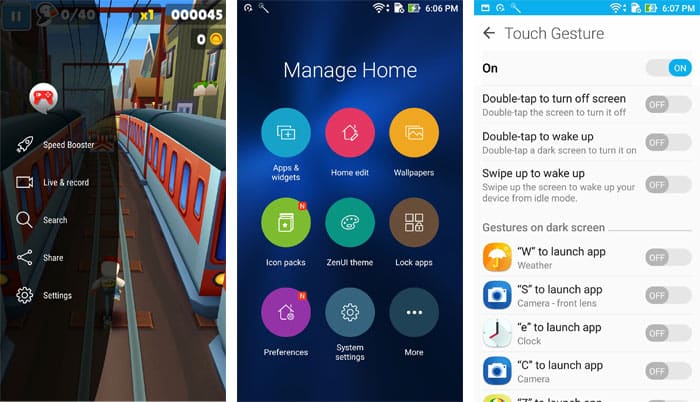 The problem we had with last year’s ZenFones was their tremendous bloatware. Asus has addressed it this year, but only to some extent. It has cut down on some unneeded apps, but has still kept a good number of them. Plus there’s the problem of apps advertising themselves everywhere. Take for instance this Manage Notifications tab which cannot be dismissed from the notifications pane unless you actually disable the entire Mobile Manger app. But like we said, this is way less bloat than last year, and you can always disable such apps and stay happy. Cheers to Asus for listening to the feedback and making the new changes.

On the back of the ZenFone 3 is a 16-megapixel rear camera with an f/2.0 lens. Like we said, it’s got the same sensor as the one on the OnePlus 3 and the Xiaomi Mi 5, both of which have been proven to be great at point and shoot photography. So is the result the same with the ZenFone 3? Well the images clicked outdoors under natural light came out incredibly beautiful. They were highly detailed and accurate. In our comparison with the OnePlus 3 we found that the ZenFone 3 actually adds a bit more color to the images, but never so much that they end up looking artificial. The camera however is beaten by the OnePlus 3 when it comes to indoor photography. 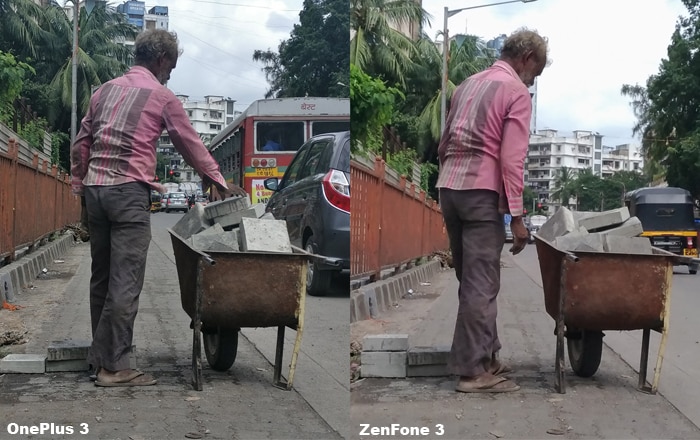 The ZenFone 3’s indoor photos are good, but they struggle to achieve the kind of sharpness that the OnePlus 3 offers. In low light, shots from the ZenFone 3 had considerably less grain, but they were also very short on detailing. The company has employed a Tri-Tech autofocus technology which takes advantage of a second-gen laser, phase detection and continuous autofocus to provide fast focusing. This technology does what it says, since the focusing of this phone is incredibly fast. Something that distinguishes Asus smartphones, is the plethora of different modes on offer through the Camera app. Modes like Manual, Low Light, Super Resolution, Miniature and more really give a lot of versatility to the camera of this phone.

The ZenFone 3 supports 4K videos but its optical image stabilization only applies to 1080p clips. The videos from this device are well balanced and the color accuracy too is admirable. As for selfies, the 8MP front camera is more focused on skin softening than on detailing. Even with all the beauty settings off, the images clicked indoors never looked like they’re coming from an 8MP camera. So the selfie camera of the ZenFone 3 is a big letdown. As for the rear unit, the ZenFone 3 certainly has a very good and versatile camera onboard but the fact is, it still cannot beat the OnePlus 3’s camera.

The combination of the octa core Snapdragon 625 processor and 4GB of RAM inside the Asus ZenFone 3 works great for it. The phone offered snappy performance for usual tasks and multi-tasked with ease. Games were running with smooth frame-rates even with a large number of apps open in the background. Overall, the ZenFone 3 is a solid performer that leaves almost nothing to be desired. Its camera is extremely fast to load, and its fingerprint scanner is also quick. A neat little feature of the fingerprint sensor is that a single swipe on it can save the phone from going into sleep mode. 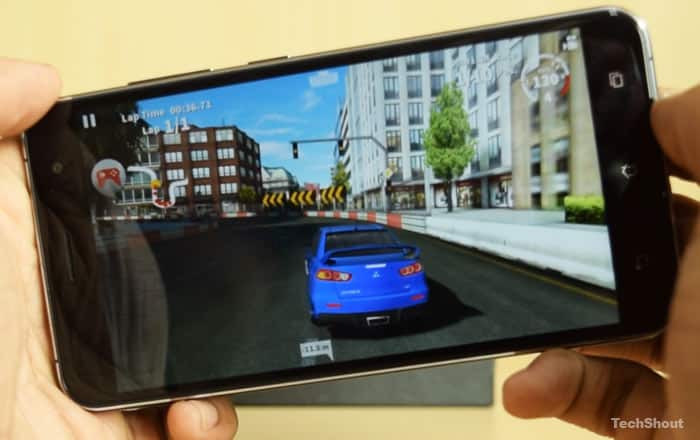 Speaking about the battery life of this Asus phone, it’s something that has once again struck me as impressive. The 3000mAh battery gave me a 24-hour usage cycle with 15 percent of juice still left on it. And my usage included four 20 minute gaming sessions, lots of WhatsApp messaging, around 5 minutes of calling in total and a continuous Bluetooth connection to a fitness band. The bottom line is that the ZenFone 3 will have your back when it comes to battery life, and will never leave you searching for a charger until you hit the bed.

After the criticisms received for the ZenFone 2 range, Asus has certainly bounced back with the ZenFone 3. This mid ranger really puts a great proposition in front of its potential buyers. Its astoundingly beautiful body is accompanied by a bright and vivid display and an admirable camera. Moreover, the performance and battery life are impressive as well. This is indeed a great phone if you’re going out there for buying a mid-range device. But before doing that, do make sure to read our review of the OnePlus 3 as well, which is another good phone for the same price tag. As for the Asus ZenFone 3, we’re going with 4 out of 5 stars.