If you thought the 4GB RAM on the Asus Zenfone 2 smartphone was crazy, we’d sure love to hear your thoughts of it having 128GB of internal storage as well. A new variant of the ZE551ML model has showed up and it packs both features with the same great hardware the other options have to offer.

Well, the company hasn’t made this version official as yet and the Asus Zenfone 2 smartphone was spotted on Flipkart. The listing could be fake or a mistake from the ecommerce giant. Then again, there’s a price tag of Rs 29999 affixed to the handset and no other version in the series costs this much.

Also, you’d expect Flipkart to pull the listing soon if it’s an error, but the 128GB ZE551ML model has been up for many hours now and is said to be coming soon. There’s a good possibility that Asus might made this version exclusive for India as it hasn’t launched it elsewhere as yet. 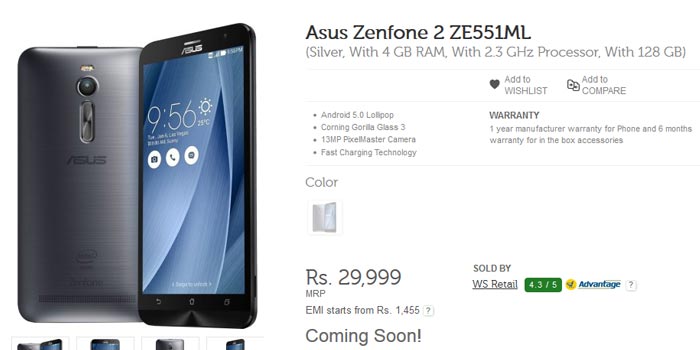 Here’s the most interesting part – The 128GB of internal storage can be further expanded via the microSD card slot. The phone supports up to 64GB and considering that it meets SDXC standards, we’re sure even 128GB cards will be accepted.

Here’s a roundup of the key Asus Zenfone 2 ZE551ML specs:

You can check out the 128GB Asus Zenfone 2 ZE551ML listing for yourself through this link.