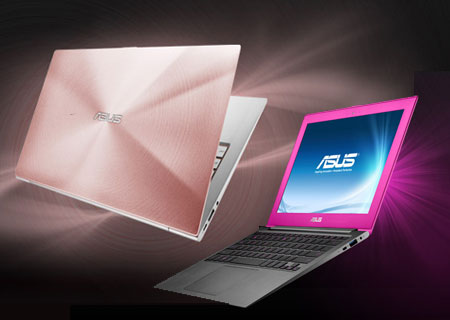 Two new variants of the Asus Zenbook family recently washed up on the shores of the UK in bright hues of hot pink and rose gold. Both the UX31 and UX21 Ultrabooks are expected to roll out dressed in these shades by the end of April 2012.

Besides retaining the same specifications housed by the previous versions, the new color options are said to feature the original spun metal finish. The main goal here seems to be aimed at creating a more striking look for the Ultrabooks. And this is combined with the highly portable and slim form factor these notebooks are designed around. Measuring just about 3mm at the front and 9mm at the rear end, the fresh additions are equipped with choices from the second generation Intel Core processor series. Users will also have options of different Windows 7 editions. 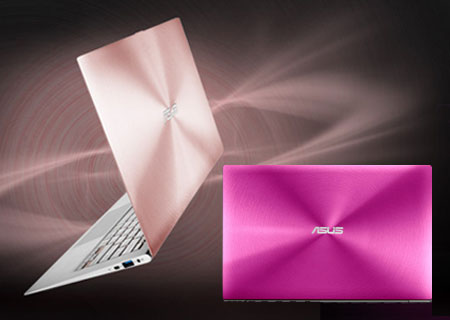 While the UX21 wraps in 2GB to 4GB of on-board DDR3 memory, the UX31 variant packs in 4GB of DDR3 RAM which operates at a speed of 1,333MHz. Other features include a 13.3-inch HD+ display with resolutions of 1600 X 900 pixels and an aspect ratio of 16:9. The former is equipped with USB 2.0 and 3.0 ports, audio-in, DC power input, microHDMI and miniVGA ports, whereas the latter notebook incorporates an SD card reader as well. There are also options of SATA III SSDs along with Bluetooth 4.0, a 0.3MP webcam, a Bang & Olufsen ICEpower SonicMaster sound system and much more.

The Asus Zenbook hot pink and rose hold release dates point at sometime during the end of April. Although the price details aren’t disclosed as yet, the UX31 version will be available through PC World and Currys, while the UX21 is expected to roll out through Littlewoods and Argos.