Asus has announced the launch of two new products in India, the Transformer Book T100 as well as the Fonepad 7, both of which are slated to be made available in the country sometime in November. Users interested in laying their hands on these devices will have to shell out Rs 34,099 and Rs 17,499, respectively for the devices.

First up is the Transformer Book T100, a 2-in-1 gadget that can act as a laptop as well as a tablet. Its 10.1-inch HD IPS display of 1366 x 768p resolution can be detached from the keyboard dock to be used as a standalone slate. One of the key highlights of the device is the presence of a quad core Intel Atom Bay Trail-T Z3740 processor and Intel HD Graphics. 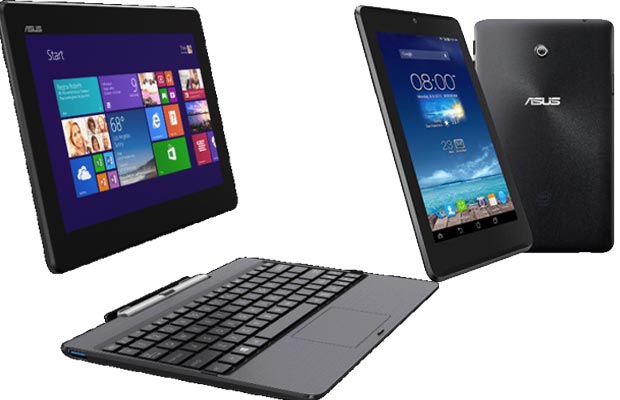 This convertible makes the most of the Windows 8.1 OS and tags along 2GB of system memory. And as for the onboard storage, you get 32GB of space to hoard your digital content on the machine. Complete with a 1.2MP camera, it draws power from a 31WHr battery and coughs up the juice for talk time of close to 11 hours.

The Asus Fonepad 7, as the name suggests, is a multitasking tablet that supports voice calling as well. This 3G-enabled slate is equipped with a dual core 1.6GHz Intel Atom Z2560 chipset and 1GB of RAM and operates with the assistance of Android Jelly Bean 4.2. Its 7-inch LED backlit IPS screen of 1280 x 800p resolution is accompanied by a 5MP rear camera and a 1.2MP webcam. You can even expect talk time of close to 28 hours from the device.

The Asus Transformer Book T100 and Fonepad 7 will be launched in time for the festive season.