Intel has unveiled its new Bay Trail processor to promote 2-in-1 form factors and the Transformer Book T100 from Asus is amongst the first to come with the latest silicon. The convertible was shown off at the IDF 2013 along with the Transformer Book Trio which employs 2 CPUs, a fourth generation Haswell as well as an Atom, and the ability to conveniently switch between Windows and Android.

The 2-in-1 approach basically means that the device will have a 2-part dockable design. This allows you to use it solely as a tablet or as a laptop by attaching the keyboard extension. The Transformer Book T100 is basically a smaller version of the T300 which went official at the IFA 2013. It features a 10.1-inch IPS multi-touch screen proffering HD visuals and 178-degree viewing angles. The device has a slim design which weighs around 1.2 pounds, making it amongst the lightest in its category. 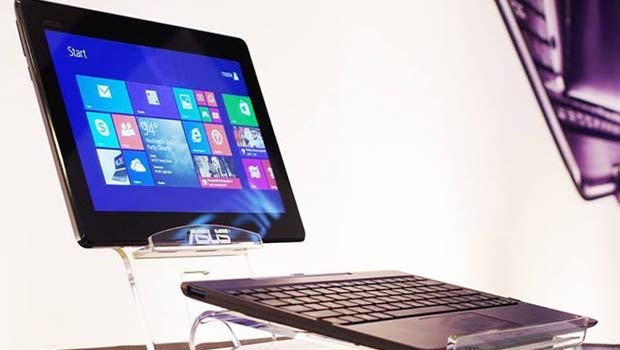 The convertible comes with Windows 8.1 preloaded and is accompanied by Microsoft’s Office Home & Student 2013 edition which providers full versions of Word, Excel, PowerPoint and OneNote. A quad core Intel Atom Bay Trail-T Z3740 processor delivers the steam and according to the company, the Transformer Book T100 is capable of delivering 11 hours of activity on a single charge. The device is bundled with a lightweight keyboard dock for comfortable text input. It also sports a multi-touch touchpad which has full support for Windows 8.1 gestures and USB 3.0.

The Transformer Book T100 will be available when the latest Windows OS goes official. It’s priced at $349 for the 32GB model and $399 for the 64GB variant.