Asus publishes Android 5.0 Lollipop update schedule and devices getting it

Asus isn’t know for delivering quick updates to the latest versions of Android and if you’re currently rocking a device from the Taiwanese OEM, you’re probably wondering when version 5.0 Lollipop will be made available. Well, if you own a ZenFone, the PadFone S or the new PadFone Infinity (A86), you should see the latest firmware rollout in Q2 of 2015.

Yes, it’s certainly going to be a long wait for you guys and for Asus devices not mention above, it might take even longer for Android 5.0 Lollipop to come your way. The company has released a timetable on its ZenTalk forum which shows their planned schedule for the update that should start rolling out in April. 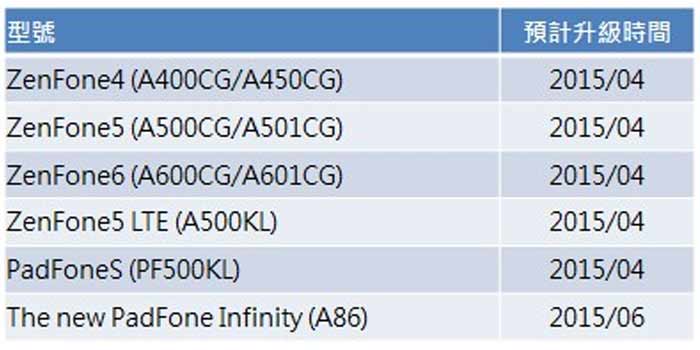 We’ll have you know that the dates are not fixed as yet, so don’t get worked up if the OEM comes up with a revised schedule. As you can see in the image above, the entire ZenFone series (which recently received Android 4.4 KitKat) will be updated including the LTE version of the ZenFone 5.

Also read: Asus gives a peak of its new smartphone and smartwatch for Zen launch event on October 28

There’s no word about the latest tablets through, but seeing as the majority of them run on the latest Intel processors with 64-bit support, there’s no doubt that Asus will deliver the latest Android has to offer. In other news, the company is holding an event which will take place later today. What we know so far is that it plans to launch a new ZenFone handset or an entire series and a smartwatch which could be a mere variant of the ZenWatch we seen back in September.

For a quick look at what Android 5.0 Lollipop will offer on your Asus device, be sure to check out this link.