Asus has introduced a refreshed version of the PadFone Infinity multi-purpose device which boasts of some advanced features. It is identical to the earlier one and the company is giving existing Infinity users an option to retain the tablet dock and swap the accompanying phone for the new one. The gadget will be offered in models with either 16GB or 32GB onboard memory, splashed in hues of titanium black or platinum white. Prospective customers cannot pick it up in shades like gray, pink or champagne gold though.

Unlike the previous version of the gadget, the new Infinity will not come in a variant with 64GB internal storage, but it won’t make much of a difference considering that the Taiwanese company has carved a microSD expansion slot into the chassis for additional hoarding space. Also, it should be noted that the Snapdragon 600 chipset has been replaced with a Qualcomm Snapdragon 800 processor that clocks in a maximum speed of 2.2GHz. While the earlier device relied on LPDDR2 RAM, the refreshed one has 2GB of LPDDR3 system memory. 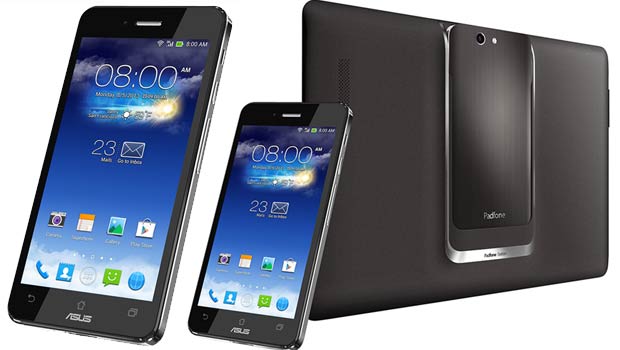 The Android 4.1 OS has sidestepped to make way for the Jelly Bean 4.2 platform that naturally brings a horde of new attributes to the table. And those who have decided to stick to the original Infinity need not get disappointed as it is likely to get a software upgrade as well. Most of the attributes remain constant which means customers can expect a 5-inch Super IPS FHD touchscreen, a 13MP camera, a 2MP webcam and a 2400mAh battery amongst other things.

Engadget has reported that the new Asus PadFone Infinity costs NT$18,990 and the tablet dock carries a price tag of NT$7,000 in Taiwan.