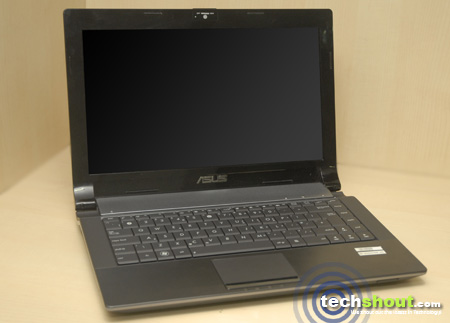 We’ve been playing the puzzle as far as notebooks are concerned for quite a bit now. There are smartphones that behave like netbooks and there are tablets that function like both smartphones and notebooks. In all this confusion, where does this actually leave those looking at a committed ‘laptop’? Yes, something that does precisely no more than computing in a mini form factor, albeit the conventional way. Early last year Asus showed off its N43JF notebook at Computex which did look like it could satiate the needs of those craving for some of these factors. This 14” stunner was an addition to the company’s N-series of notebooks. Might we add, the looks, the build of the device and everything about it in general seemed like it was devised for computing on the go. We put this lap happy device through its paces to know just what it’s all about. Here’s a review.

The Asus N43JF came bundled in a rather rugged business-like carrying case and a couple of chargers. There’s something about not being white and black but just the right shade of grey that this notebook emphasized on with its outer lid. The aluminum brushed finish gives the device a very classy appearance and Asus stamps it with a Chrome Asus logo in the center. The innards of this device are no different, they’ve been designed to impress. On the inside, it’s an eye-catching combination of gloss and matte in hues of black-grey. While the screen frame and the mouse buttons get a dose of the former, the hinges, keyboard and the speaker grill are lacquered soberly. The touchpad has a brushed metallic look like the exteriors. The overall build quality of the device seemed sturdy and we instantly loved the way the hinges held the screen to the rest of the chassis.

In its slim and lightweight profile, the Asus N43JF notebook has rounded edges which give it that rather chic appearance. It’s about 35.0 x 24.0 x 3.30~3.70 cm (W x D x H) in dimensions and tips the scale at 2.4 kg. The tailoring gives the device a slight dip in the portion where the hinges have been fixed. Moving over to the brims, the left one features cooling vents and four ports for LAN, HDMI, eSATA and USB connections. The 3.5mm headphone and microphone jacks are also placed here. On the right side, there is a duo of USB ports (USB 2.0 and USB 3.0) accompanied by a DVD multi-drive and a WLAN switch. It’s just the SD card slot that’s seated on the front edge. As for the dorsal area, there is the AC power in, the VGA port and a security lock slot. 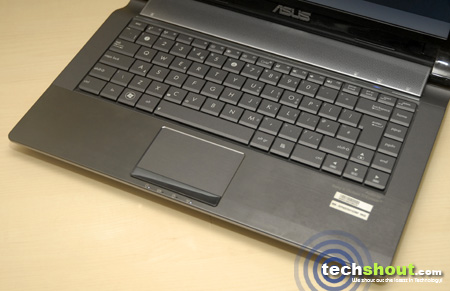 The keyboard features large keys that make for quite a comfortable typing experience. The fact that the buttons aren’t too crammed up and have enough space in between only makes it an added advantage for longer typing hours. We only have our reservations for the quality of the keys as they appeared to be too feeble and we aren’t quite sure if hard presses and long usage will have them sustain through. The touchpad however is anything but that. Its smooth sailing all along and you can have it tweaked to suit your needs just right. The Elan Smart Pad software enabled us to design movements and gestures that not only imitated complete mouse actions, but also offered that extra something while navigating through.

If there’s anything in this Asus offering that can claim to be a notch above most of its counterparts in this size, it’s got to be the audio quality. The included SonicMaster technology has audio content being belted out loud and clear, while giving a dose of the Bang & Olufsen ICEpower experience too. For video lovers, Asus throws in the Asus Video Magic software which does more than its bit to appease. The onboard Intel HD graphics coupled with the 14-inch screen that boasts of a native resolution of 1366 x 768 make this device all the more sweet-tempered for home multimedia needs. Add to this, the verifiable truth of being able to transfer large files in a jiffy, and it’s almost a pro on this front.

There’s also a control deck widget that slides in controls like volume, resolution, brightness, an Entertainment mode, Fast Boot and more. The Asus LifeFrame tool puts the webcam out in the open and tweaks the camera frequency depending on the chosen country. There are many filters, frames, and adjustments that will enhance your webcam experience. If only the image quality would have been just as good. Following in line with Dell and HP who offer dedicated gaming centers, this Asus wonder too includes the Game Park Console for added fun. The screen flickers vigorously when you move back and forth the gaming area and desktop or any other application for that matter. Maybe it didn’t like the idea of us playing around with Mrs. Piggly, but we were so determined to do just that. Based on the Windows 7 Ultimate 64-bit operating system, the listed specifications pretty much make this Asus baby a mean machine. The 4GB RAM is well complemented by Intel’s Core i5 CPU running at 2.40GHz. The 500GB hard drive capacity should suffice the needs of an average hoarder. The battery life just managed to touch the 3 hour mark which we think is pretty average for a computing device that’s built for on-the-go use. 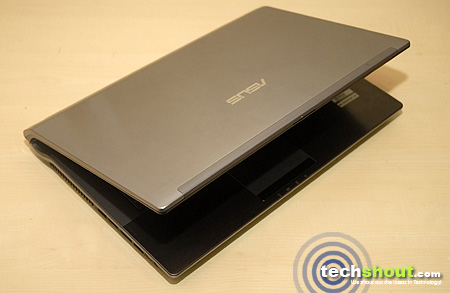 The laptop didn’t show any glitches in performance, at least not in the time it spent with us.

There’s much to look forward to on the laptop whether you’re a casual gamer or an on-the-move business user.

The fabrication of the keyboard looks too gentle for rough use.

The device doesn’t seem to dissipate heat that well with its bottom toasting up even on moderate usage.

A smooth trackpad, tactile keyboard, good battery life – these are just some of the things we’ve come to expect from all notebooks. Not that the Asus N43JF laptop that we had on our desks is a stellar at any of these. But we did come to fall in love with it by the end of our scanning period for more reasons than one. Pick it if you must solely for pure computing and audio pleasure. It’s a 9 out of 10 rating for this laptop from us.