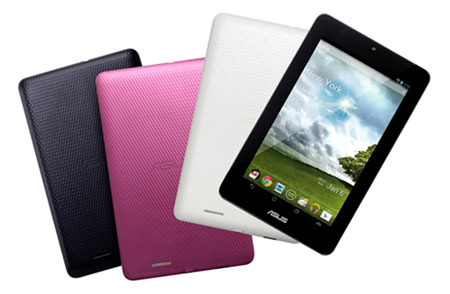 The price for the Asus MeMo Pad has been revealed as has a broad release date and the 7-inch device brings Jelly Bean for a fairly reasonable sum. Wi-Fi connectivity has been included, while dimensions of 196.2 x 119.2 x 11.2 millimeters and a weight of 370 grams make it conveniently portable.

The MeMo Pad is made to run the Android 4.1 Jelly Bean platform, bringing the OS experience to users through a 7-inch, 10-point multi-touch, LED-backlit display which itself can boasts of a 1024 x 600p resolution, a 350-nit brightness and a 140-degree viewing angle. It offers full support for the Google Play store offering access to the multitude of content.

Internal storage options include an 8GB model as well as a 16GB variant. The capacity on both should prove ample, but in the event that it falls short, there’s always memory expandability up to 32GB via a microSD card slot. There’s also a microUSB port through which the device can be charged and a 3.5mm headphone and mic jack.

A 1MP front-facing camera makes its way onto the device and the company says it is capable of recording video at 720p and at 30fps. The device packs 1GB of RAM under the hood and brings along a VIA WM8950 processor CPU running at 1GHz. Backing up all this firepower is a Mali-400 GPU which ensures that tablet is capable when it comes to viewing media on the slate.

Connectivity options include 802.11b/g/n Wi-Fi, while it comes with several pre-installed apps including SuperNote Lite, BuddyBuzz and MyBitCast, plus a few from the manufacturer for web storage. A claimed battery life of about 7 hours is squeezed out of the gadget’s 4270mAh Li-polymer unit.

The Asus MeMo Pad will be made available sometime this month in select markets and through authorized retailers, although exact details of launch haven’t been provided. The company is quick to point out that it is a ‘tablet-only product’ and does not feature a dock (like the members in the Transformer Pad series). It should hit retail starting at $149 and in three colors including sugar white, titanium gray and cherry pink.