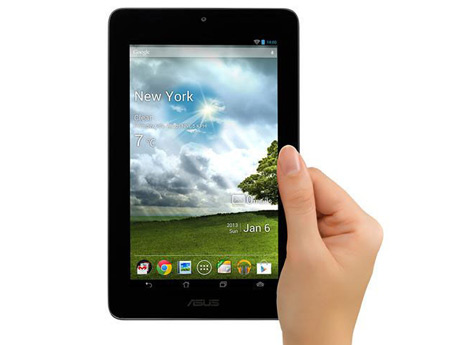 The Asus MeMo Pad HD is set to go on sale in US, UK and other countries later this year, as a new leak has gone on to predict the existence of the device. This is apparently a quad core successor to its predecessor (pictured above) which had been introduced earlier this year, slapped with a budget price tag.

These purported details about the device were spotted by GSM Arena on a Filipino blog which goes by the name of Yugatech. And although no photographs of it have been revealed, there are in fact a few specifications that can be glanced at. Firstly, justifying its name, the Asus MeMo Pad HD will supposedly kick in a screen with a resolution of 1280 × 720 pixels at 210ppi. Its size will still be 7 inches however.

The 4.2 version of Android Jelly Bean is said to be at the heart of the Asus MeMo Pad HD, which is nothing to be surprised about. Instead of the 1GHz VIA WM8950 processor which powered its precursor, a 1.6GHz quad core chipset will be at the heart of it, says the report. And there is high possibility that it will be a Mediatek unit, considering that the company will be aiming to keep things budget-friendly this time around too.

No update is expected in the RAM department, as a 1GB unit is being claimed to have been granted to the Asus MeMo Pad HD. And as far as its internal memory is concerned, it will apparently come in the form of a 16GB variant. It’s a given that Wi-Fi will be present on the device, but its other connectivity options haven’t been revealed by the leaked report.

Yugatech has however speculated that the MeMo Pad HD will be made available in black, white, blue, pink and yellow colors. Its estimated price is being claimed to be $169 in America and €149 in Europe. We’re apparently looking at an official announcement during the Computex 2013 event which is all set to take place in Taipei, Taiwan from June 4 till June 8.