We already knew about the existence of an Asus MeMo Pad FHD 10 LTE version before, and thanks to a recent unofficial flaunt of the device by the company‘s CEO Jerry Shen, we also knew that it is to feature a Snapdragon beast inside it. But now, Asus has finally decided to go official with it, as it has released a YouTube video which gives a detailed breakdown of its specifications. Despite this, and despite the fact that we know that it’ll feature a quad core Snapdragon processor underneath its hood, it’s still unclear exactly which SoC the tablet has embraced.

The Android 4.2 Jelly Bean OS has of course been granted to this slate. Thus, along with other abilities of the software, the Miracast trait for peer-to-peer wireless screencasting also finds its way into it. As its name suggests, the Asus MeMo Pad FHD 10 LTE kicks in a full HD monitor on its front surface, displaying its visuals with a 1,920 x 1,200 resolution. This IPS panel is 10 inches in size, while the tablet’s thickness measures 9.9mm. 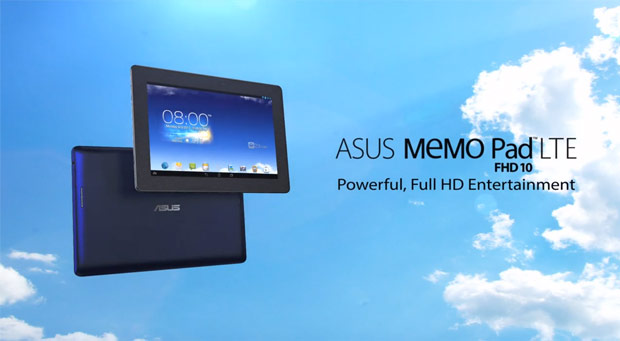 And like we said, a quad core processor of an unknown clock speed will be ticking inside it. At the moment, we’re guessing that the newest Snapdragon 800 setup could be infused into it, since it’s an LTE slate. Its other specifications include stereo speakers, a 5MP AF camera, 10 hours worth of claimed battery life, a microSD card slot and an optional Folio Key keyboard cover.

There’s no price and release date information about the Asus MeMo Pad FHD 10 LTE as yet however. A non-LTE version of the tablet is also to be made available with slightly different specs.