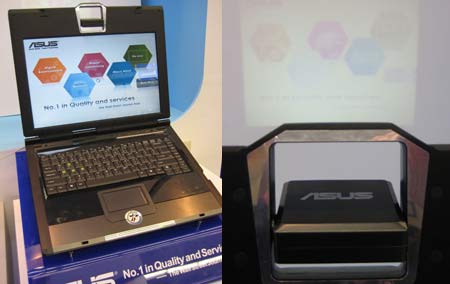 We have surely heard of the tiny mobile phone adding up the projection facilities with Texas Instrument’s plans on Mobile Phone Projector, now the same feature is set to be added on the Laptop with Asus presenting its Laptop Prototype which features a Built-in Projector.

If a mobile phone can add in this feature, then why leave the laptop behind, thus Asus thought of letting their latest Prototype project on a big screen with its built-in projector. The Laptop provides flexibility with the option of rotating and swivel actions with the built-in projector so that one doesn’t have to sit in one particular position with their laptops.

The Built-in projector sits neatly on the top of the LCD screen which resembles a huge webcam. The quality of the projector hasn’t been revealed as yet, but since it’s an Asus production we can expect some great quality to be delivered. Since this is still a prototype, we will have to wait for its price and availability details to be released.