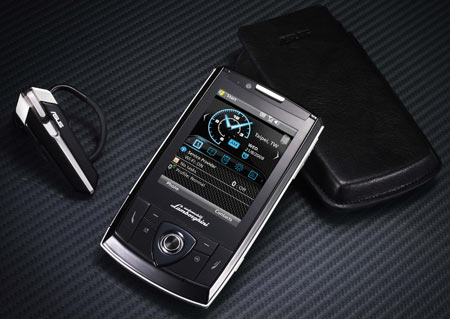 The partnership between Asus and Lamborghini has resulted in the launch of a luxurious PDA phone named ZX1. Unveiled in India, the handset features a body having beehive texture as well as a shiny surface, offering a lavish look to the device. Also it is equipped with a 2.8” touch screen display.

Not only does it flaunt a luxurious look but the phone is also rich in its functionality. The ZX1 boasts high-end features such as wireless 802.11b+g, Bluetooth v2.0+EDR, USB2.0 compatible and GPS. Further it is powered by Windows Mobile 6.1 Professional OS.

Edward Wang, Business Head, Mobile Communication Business, ASUS (India) said, “ASUS ZX1 is the 1st co-branded PDA phone from ASUS and is targeted towards a very niche segment, for people who have a penchant for style. PDA phones are increasingly becoming fashion gadgets and the ASUS ZX1 gives the user the ultimate ownership experience.”

Wang added, “We wanted the end user to feel engaging an experience as driving a Lamborghini car and you’ll find elements of style and design of the Lamborghini car seamlessly incorporated in the ZX1 at every level. Manufacturers are releasing many such co-branded products but ASUS chose Lamborghini as our co-branding partner in the PDA phone segment as we share the same position in PDA phones as Lamborghini does in the automobile industry.”

The ZX1 PDA phone is expected to be available across India in June 2008 at the approximate price of Rs. 47,777.