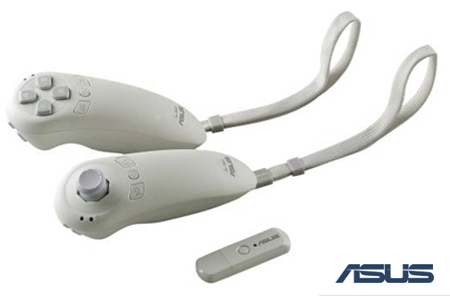 The most unique feature of Eee Stick is that it translates the user’s physical hand gestures to corresponding movements on the screen much like the Nintendi Wii controllers. And the highlight of the game controller is that it is a 3D remote making it highly versatile, suitable for any sort of game.

The Eee Stick comprises of Activation Stick and a Navigation Stick. The sticks claim to consume very less power even if operated for three days at a stretch.

The ‘Activation Stick’ comes with 7 game keys and can sense 8-way motions converting them into 3D motions. It is also vibration capable.

Both the sticks featuring USB 2.0 interface are powered by AA battery x 2, have fully programmable keys and are available in white. The sticks are effective in the range of 10m even when not pointing directly towards the 2.4GHz RF USB dongle.

Built for gaming on the go, the ASUS Eee Stick can be used with Eee Box, Eee PC and any other personal computer. The Eee Stick can operate in three modes – 3D Motion mode, Pointing mode and Tilt mode.

Whilst in 3D mode, the Eee Stick can reproduce any hand movements and wrist rotations made along the 3D axes, making it suitable for action and spots games. The Pointing mode lets the controllers focus and aim thereby making it ideal for First Person Shooters and light gun games. The Tilt mode reproduces forward, backward and sideways movements for racing and flight games.

The ASUS Eee Stick is available with select models of Eee PC and Eee Box with a collection of games developed to use with the Eee Stick controllers.