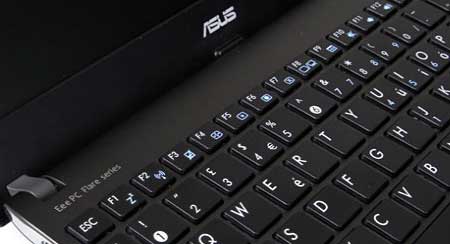 Details and images of the Asus Eee PC Flare series netbooks have recently been leaked into tech ville and if these are anything to go by, then the era of mini-laptops may probably not be dying out yet. The range may see the integration of the latest N2600 and N2800 Atom CPUs as well as the Intel Cedar Trail chip in some models.

The images dug up by Notebook Italia reveal a vibrant range of netbooks which are coated with blue, purple and red shades, giving them a stylish edge. Furthermore, these leaked snaps indicate the incorporation of a chiclet–style keyboard which has the words ‘Eee PC Flare series’ etched on the top end corner. The deck is also complete with other attributes such as small hinges that happen to be parallel to the base of the keypad, which naturally move down when the display is opened up.

The PC Flare sports an LCD screen wherein, the bezel bears the Asus logo at the bottom. A post on Engadget shares that the lineup will be bringing in 12-inch and 10-inch variants for netbook lovers. Furthermore, the 10-inch Eee PC 1025 range includes the Eee PC 1025C and Eee PC 1025CE models. On the other hand, the 12-inch Eee PC 1225 range apparently features the 1225B model which will come fueled by AMD’s Fusion APU, while the Cedar Trail CPU is said to be powering up the 1125C netbook.

The Asus Eee PC Flare series netbooks are expected to make an appearance at the CES 2012 which is slated to be held this month. Technology enthusiasts can watch out for the 7-inch Asus Eee Memo Pad which may also make its presence felt at the event.